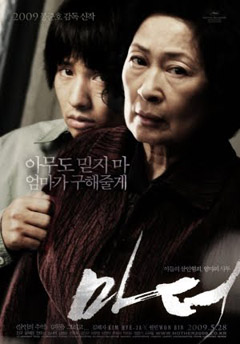 Joon-ho Bong turns what could have been a wrist-cutting, tear-jerking drama like Mother into a surprisingly good thriller, in which a mother’s love can be capable of many things.

Do-jun (Bin) is a 20-something-year-old guy with some mental problems, who lives with his mother (Kim) and hangs out with the wrong crowd, namely Jin-tae (Jin), who often blames him for things he’s done. Things take the wrong turn when Do-jun becomes the main suspect in the murder of a teenage girl, and his mother must do whatever it takes to prove he is innocent.

Kim has, by far, one of the best female performances this year, and her performance is only highlighted by the story, which keeps you guessing on what’s going to happen next.

It is almost heartbreaking to see her struggle with the slacking police investigation and a lawyer that seems more interested with his leisure activities than her son’s case. And it is particularly shocking when Do-jun reveals he’s remembered something about his childhood and we see it all play out on screen. The same can be said about one of the last scenes, in which the mother realizes what’s going to happen next.

No wonder Korea decided to choose this film to represent the country in the next Academy Awards, which will hopefully point the spotlight back to Asian filmmaking.