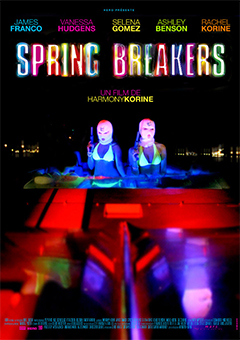 Harmony Korine’s Spring Breakers begins by immediately assaulting the senses with exactly the kind of oversexed goodness you’d expect from a bunch of drunken college students in a montage of booze, babes, and booming dubstep that rivals all other Spring Break movies.

As wild as this opening is, Korine’s tale is actually more of a surprisingly intimate coming-of-age tale that just had its morals tied up and shot in the head by a masked girl in a bikini. Korine’s cast of lovely young woman is introduced through little glimpses of their college situations. The one good girl in the bunch is Faith (Gomez), who sits around in her prayer circles providing the perfect contrast to Candy, Brit, and Cotty (Hudgens, Benson, Korine), the bad girls who love sex, drugs, and most of all money. Yet all these girls share a mecca of sorts in common: Spring Break.

How do good girls gone bad get to attain this almost spiritual experience? Not through hardcore prayer, but by robbing a restaurant. Korine shoots this impressive scene in one long take from a car circling the restaurant as the girls steal cash and run in their little pink pony masks. The abundance of My Little Pony: Friendship is Magic scattered throughout all these drugs and violence is enough of a tell of corrupt innocence, but Korine always takes it ten steps further. These girls have been trapped in this bland, safe world, surrounded by fluorescent lighting, and now they have the means for escape.

At first, the Spring Break Experience is something of pure joy. The same dubstep, the same booze, and the same babes that populated the opening is here, accompanied by Selena Gomez’s Malick-esque voiceover in which she claims, “I am starting to think this is the most spiritful place I’ve ever been. I think we found ourselves here.” Everything seems more vivid once the girls reach this warm and friendly land of pure excess. And then, almost like a sick joke has been played on them all, they’re arrested.

Damsels in distress always need a hero, and who better to swoop in and save these ladies than the sleazy looking rapper Alien (Franco). If anything can be said about James Franco’s work here, it’s simply that he takes it to another world. At first, he’s a terrifying figure, one that literally removes all faith from these girls in one of the grimiest scenes that the film has to offer between Gomez and him. Yet it takes no time at all for Korine’s screenplay to take an all too shocking turn into a neon dream world of crime and sex, a world that only exists to critique the American Dream and a world that shows just how much of a “gansta with a heart of gold” Alien really is.

This neon fantasy, no matter how disturbing and distant it is at times, is an absolute visual treat. Coming from the person who shot Noé’s Enter the Void and Irreversible, it should come as no surprise that Benoît Debie’s style for Spring Breakers is one of its most exquisite features. While nothing quite lives up to the grand finale in terms of beauty, Korine and Debie save the most memorable moments for Alien and his interactions with the girls, who he lovingly refers to as his “motherfuckin’ soulmates.”

From the moment Alien steps into the girls lives, the film becomes his to guide. “Look at all my shit!” he yells in a hilarious monologue that reminds one just how materialistic these people are. Violence is the way to attain this false notion of an American dream and Korine, notorious for being repetitive, shows it again and again in those aforementioned memorable moments. Each scene, even when accompanied by Cliff Martinez’s almost soothing score or the wild soundtrack, is punctuated by the sound of a gun being cocked, further delivering the message. Whether it’s a montage of crimes set to Britney Spears’ Everytime or two women forcing a man to perform fellatio on a gun, this is the American dream. Any screenplay this loose and repetitive needs just the right touch of editing, and these scenes come together seamlessly to deliver exactly the message that Korine is going for.

No matter how appealing all of this might look to some audience members – specifically those who dream of going out and getting “fucked up” after watching this that Korine has such contempt for – Spring Breakers completely disintegrates the notion of this constant partying and materialism being the American Dream. As everyone who’s ever suffered through The Real Cancun knows, there’s no end to the culture that has erupted around this fantastic escape known as Spring Break. Harmony Korine knows this, and his way of reminding the world is by creating a film that never stops reminding you: “Spring break forever bitches.”