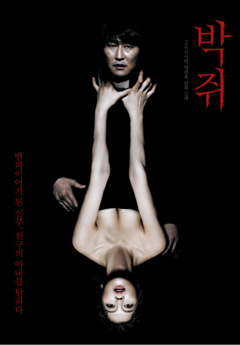 Yes, Thirst is a film about vampires, but not your typical film. For starters, it isn’t about a helpless girl that falls deeply in love with the broody but charming vampire. This is not for the young Twihards, and the girl in question is hardly helpless. In fact, she’s kind of scary.

Thirst is a film by Park Chan-wook, starring famous Korean actor Song Kang-ho as a Catholic priest who becomes a vampire and must fight the urge to give in to his animalistic instinct. However, don’t be mistaken. This film isn’t a scary one. Yes, you’ve got horror, and you’ve got dark comedy and drama with loads of sex. I told you it wasn’t for the kiddies.

Because the film has so much mixing together, you don’t really know where the film will lead. You certainly have an idea, but you can’t know for sure until it’s about to happen. That’s what’s so awesome about Korean films, not fearing to blur the lines between genres as they show you the most gruesome of scenes while making you laugh.

And that ending! It was funny and melancholic at the same time. Few films create this effect, but it actually works here.