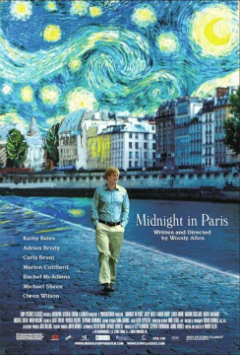 With over forty years of filmmaking under his belt, Woody Allen continues to bring us films year after year. With his latest picture, Midnight in Paris, it’s no wonder to see how Woody Allen remains relevant today, though he remains madly in love with the past.

At its core, Midnight in Paris is a film about nostalgia: a yearning for the past. Not only does the film bring us to a city with an extremely rich history – in the arts especially – but it also transports us into a world that has that hint of Allen magic: where anything can happen and nothing feels out-of-place, no matter how implausible it really is.

Owen Wilson stars as Gil – a screenwriter who’s working on a novel while traveling with his fiancé (Rachel McAdams) and her family (Kurt Fuller and Mimi Kennedy) in the city of Paris. After meeting some of her pretentious friends (Michael Sheen and Nina Arianda), Gil decides to head off on his own through the streets of Paris at night. At midnight, after the bell tolls, a group of partiers pick him up and sweep him back to Paris in the 1920s.

There he meets a colorful collection of characters and famous figures, with whom he spends every night. Among them are Scott and Zelda Fitzgerald (Tom Hiddleston and Alison Pill), Ernest Hemingway (Corey Stoll), Gertrude Stein (Kathy Bates), as well as many others. He also meets the lovely Adriana (Marion Cotillard) who serves as a muse and lover for many of the artists and writers of the time – Gil being no exception.

Wilson truly shines in this film – and it might just be the best performance he’s ever given.  Where many others have tried and failed, he takes on a role that Woody Allen would have written for himself, but not as Allen would do it. He plays the character like Owen Wilson would play Woody Allen, not as Woody Allen would play himself – and he does a marvelous job. Aside from his performance, an extreme round of applause should be given to this ensemble cast. Not a single character out of place, and every actor and actress – both newcomers and well-trained – truly shows their potential, delivers Allen’s lines expertly, and succeed in getting laughs from the audience.

Allen returns to what makes some of his older films so appealing – fantasy and romance. Not the romantic entanglements between Gil and his fiancé – or between Adriana and him – but a romance between Gil and Paris: the city he loves. Plenty of connections to Allen and the city Manhattan will be drawn from this film, especially with the lovely set of city shots that opens Midnight in Paris, just as he did with shots of Manhattan decades earlier. But many fans of Woody Allen’s previous works will be mostly reminded of his charming fantasy film The Purple Rose of Cairo while watching this one – due to the magical nature of both.

Although the film will mostly appeal to audiences that are well-versed in the art and literature of the past, it is ultimately a movie that can lure anyone in. They call Paris the city of love, and Woody Allen shows us just that – a city that anyone can fall in love with, no matter what decade they’re from.