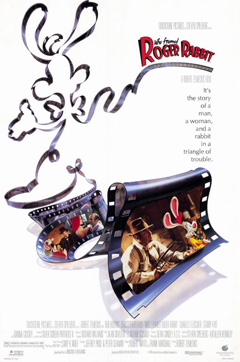 I am feeling older and older by the minute.

There’s just something really fantastic about the animation technique in Who Framed Roger Rabbit — all these toons, they’re just crazy! This lent itself for all the wacky stuff animators could do with it. If you love animation, and animation history, there is no way you didn’t (or won’t) enjoy all the animated cameos — from small appearances in the Maroon Studios backlot or that historic piano duel between Donald Duck and Daffy Duck.

Though we have always praised Pixar for its dramatic tones packaged in lighter affair for children, we must agree that animation used to be a lot darker than it is today — or maybe it’s because we differentiate audiences a lot these days. It isn’t only the sexual innuendo, despite all the silly Roger Rabbit stuff, Jessica Rabbit is a walking bag of sex with all her lovey-dovey love for Roger. It isn’t about the violence or how much blood there isn’t either, but the machinations — power and political machinations.

Here is a judge who isn’t really a judge, but an infiltrated bad guy who’s out to get everyone. He gets to a power position, and uses his connections to get what he wants, hiding his identity from all.

Our detective hero is a drunk with a past, and though I really think the emotional side of the story is really lost in all the surreal animation that involved Toon Town, it does give us the idea that Detective Valiant is more than just a grumpy drunk with no sense of humor.

Most of the film’s success relies on the production’s ability to put animation and live-action together. Without it, the film would be just too disjointed… too out there, we would at least need a joint for the ride. As it is, we can just stare at the things going on the screen when things don’t make sense.

Since those years, there hasn’t been a leap in technology as huge as this was in animation. There have been many advancements, but they have been gradual, the technique is now focused a lot on clean-cut rendering, and a lot have forgotten how to give animation soul. Who Framed Roger Rabbit still looks as sharp as ever, the green screens may not look clean, but all the interactions of Roger in the real world still look fresh and makes you believe that he might really be there.