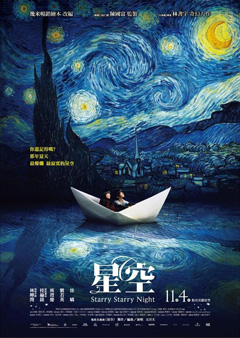 Van Gogh has just left his hipster status by being featured in two posters this year — the other one being Midnight in Paris, which everyone should own by now.

Starry Starry Night, based on the illustrated book of the same name, is a different Taiwanese coming of age drama with fantasy undertones. It tells the story of pre-teen, Xiao Mei (Xu), who is at that awkward stage between a kid and a teenager.

Disturbed by the strained relationship between her Mom (Liu) and Dad (Yu) and worried about the deteriorating health of her Ye Ye — grandfather — (Tsang), Mei often turns to her imagination. At school, she meets the new boy in town, Jay… Chou — heh — (Lin Hui Min, in his debut role), whom she shows a curious interest in.

However, don’t mistake Starry Starry Night for a girl-meets-boy-and-they-solve-their-troubles-together type of film — this is definitely not Amelie, despite there being animated inanimate objects and some French going on. Above all, this is a film about a girl who learns to cope with life, but instead of “growing up” or learning something very valuable to become an adult like so many coming of age stories do, Mei learns that to be able to let go, you have to be able to hold on as tight as you possibly can for as long as you’re able.

In the end, I feel like Mei just stayed a child a little bit longer.

Josie Xu has the very difficult task of carrying almost the whole film on her shoulders. She gets a bit of help midway through the film from newcomer Eric Lin Hui Min, who looks a little bit like a chibi version of Lee-hom Wang, to tell you the truth. Hilarious, if his character is Jay. Both young actors have good chemistry playing against each other and carry that almost platonic relationship in all their scenes together.

Starry Starry Night also shows the deteriorating family units that plague society now, no matter how traditional you think your society is. Mei’s family is about to fall apart, but it’s actually Jay’s family that puts it all in perspective for us and little Mei. It doesn’t matter how bad we think we have it, somebody else is having it worse.

However, the most emotionally charged moment in the whole film has to be the last time Mei’s grandfather actually calls out her name — just that one line. I don’t know if it was Kenneth Tsang’s natural voice or if some reverb was added to make it sound deeper — think Mufasa talking to Simba deep — but it just got to me.

For those of you who have seen the film, what did you make of the ending at the puzzle shop? Did she or didn’t she?