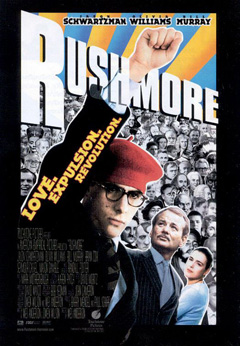 As Max tries to impress the elementary teacher, he ends up meeting Mr. Blume (Murray), the father of two mentally-deficient –or average– teenage boys who attend the school. Everything messes up as Ms. Cross and Mr. Blume start going out, and his academic life is falling to pieces.

Anderson and (Owen) Wilson’s humor and dialogue is all over Rushmore. The story is familiar enough, but also has that tinge of quirky that all their films together have. Schwartzman plays Fischer quite perfectly, being annoying for most of the film, until it’s time to redeem him… which is quite a feature — he is probably the annoying excuse for a human being, but it is also part of the character’s breakdown, as we are shown his insecurities and the lacking relationship with his father, whom he lies about a lot, that does it. All he does for himself and how he affects the people around can be explained somehow with his insecurities.

Bill Murray plays Mr. Blume as a father figure to Max, which is even more messed up for the relationship with Ms. Cross. It’s kind of awesome. My only grip about the film is: Has Olivia Williams always played someone’s wife? She’s such a great actress, it seems sort of unfair. I want her to be more than just a supporting player most of the times. In Rushmore, though she’s a central part of the story, her Ms. Cross is a little bizarre, especially in the scene with Max’s attempt to win her back.

Rushmore, however, is an age appropriate film. Sara Tanaka playing the totally rocking Margaret Yang is the perfect complement to Max Fischer.