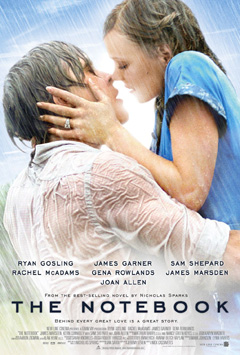 What were the chances of discussing Ryan Gosling’s qualities as an actor in The Ides of March, and have The Notebook show up on TV. It’s like the gods want me to convince Camiele of something.

But then again, I can’t blame people for wanting to skip this movie — It’s a Nicholas Sparks book and look at that cheesy poster! And with each poster iteration, it just keeps getting cheesier and cheesier. I avoided this movie for a whole year as if it were stinky tofu, until I couldn’t avoid it any longer… and guess what? It was actually a pretty darn good romance.

The Notebook is the story of Noah (Gosling) and Allie (McAdams), who begin having a steamy summer love that will last as long as Allie’s mom (Allen) lets it, which she doesn’t. Allie — for the time — is a pretty well-educated well-behaved good girl from a good family, and Noah… he’s a hooligan or something.

When the war separates them, Noah and Allie promise to write to one another, but that doesn’t happen because Allie’s mom doesn’t want that to happen. As a result, they go their separate ways thinking they’ve given up on each other.

However, as young and torrid an affair they had, showcasing that famous Gosling/McAdams chemistry that will happen no longer — man, they were so hot together — The Notebook is brought up to very moving romantic drama level thanks to James Garner and Gena Rowlands’ portrayals of elderly Noah and Allie. The film reveals that OldAllie suffers from some kind of dementia when both she and OldNoah are in the nursing home. It is so bad that she can’t recognize her children and grandchildren when they come to visit.

If we know that they end up together, what’s so good about The Notebook? It’s how they got there and what they’ve become. Each day, OldNoah takes this book and reads it to OldAllie, hoping that he can get her back if only for a few minutes. The acting in those last scenes is just pitch-perfect from both Garner and Rowlands, making the film more lasting than it really should be.

Cinematically speaking, of course, The Notebook is a run of the mill romance. There’s no swooping shots of the grandeur of the period, amazingly shot frames that will trigger your memory, or any memorable music. But who needs all that when you have a book-to-film adaptation that might be actually ten times better than the book and elevates the material to a memorable love story with great precision?