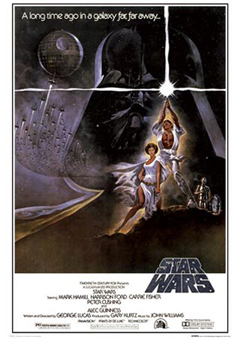 I’d bet almost everyone has seen any Star Wars movie at least once in their life. Despite George Lucas coming across as a greedy businessman trying to still make money out of his biggest franchise by re-releasing them in different formats (all 6 episodes will be released in Blu-Ray by the end of this year and starting in 2012, The Phantom Menace will be re-released in 3D as well as the rest of the films once per year, all the way up to Return of the Jedi in 2017), editing and adding extra stuff to them, I still find Star Wars to be entertaining to watch from time to time.

A New Hope follows Luke Skywalker (Hamill), a simple farmboy who lives with his uncles in the desert planet Tatooine. He is desperate to leave the planet and enroll into the Academy, but he is needed by his uncle Owen (Brown) for the upcoming harvest. Meanwhile, evil lord Darth Vader (voiced by Jones, played by Prowse) has taken over the galaxy and has constructed a station called the Death Star, which is capable of destroying whole planets. Princess Leia (Fisher), a leader in the resistance movement, acquires plans of the Death Star, places them in R2-D2 (Baker), a droid, and sends him off along with his friend C3PO (Daniels) to find Obi-Wan Kenobi (Guinness). Before the droids finds him, they end up on the Skywalkers’ farm. After hearing a message from Princess Leia hosted in R2, Luke and the droids search for Obi-Wan Kenobi, who is Leia’s only hope to rescue her from Vader’s grasp.

What can be said about this film that hasn’t been said before? At the time it was released, A New Hope was ground-breaking in regards to its use of special effects, editing, sci-fi/fantasy storytelling and memorable characters. Its technical aspects paved the road for many films that came after it. This film also influenced notable directors to enter the film industry and on their films as well, like James Cameron, Christopher Nolan, Peter Jackson, David Fincher, Ridley Scott, among others.

What makes A New Hope memorable is how the characters are used and the way the story is told. It is simple, easy to understand and it still ages well in terms of entertainment value and nostalgia. Some of the best moments of this film are seen in the lightsaber duel involving Kenobi and Vader, the scenes at Mos Eisley and the final moments of the film involving the destruction of the Death Star.

Standout performances in A New Hope includes Alex Guiness as Jedi warrior Obi-Wan Kenobi, Harrison Ford as Han Solo, a sarcastic smuggler and pilot of the Millenium Falcon, and James Earl Jones providing the voice of Darth Vader, making him seem deadly and evil in a cool way. The rest of the cast are used well for the most part of the film, but Guinness, Ford and Jones are the best A New Hope offers.

A New Hope is definitely that kind of film that one should watch before you die. And you may still like it unless you either hate George Lucas, find it overrated and/or you may prefer the Star Trek franchise (which is also good).