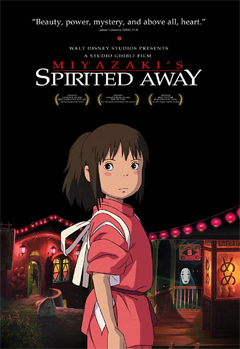 Spirited Away is a Japanese animated film written and directed by Hayao Miyazaki and produced by Studio Ghibli. While the film shares much of the animation style that made Miyazaki’s previous films famous, it is the story and the characters of Spirited Away that truly enchant viewers from the very start – arguably making it his masterpiece.

Chihiro (Hiiragi) is a young girl who is in the process of moving to a new town. While on the drive to their new home, Chihiro’s parents (Naito and Sawaguchi) take a wrong turn which leads them to what they assume to be an abandoned amusement park. She soon decides to explore on her own as her father and mother remain seated at what seems to be an empty restaurant, eating excessive amounts of the conveniently set food. Within just a few minutes of looking at the sights, she meets a young boy named Haku (Irino), who warns her to leave this place and leaves in a rush. As she attempts to run off and leave this place for good, and her surroundings begin to inexplicably change, Chihiro finds two large pigs in place of her parents. It doesn’t take much time for her to realize that she is now trapped in this strange place, full of spirits and monsters that she could have never imagined.

Once again, Chihiro meets Haku and he helps her make her way into the bath house of the spirits. As soon as she crosses the bridge to reach the bath house, her adventure begins and she must do whatever she can to blend in with the spirits until she can find a way back home. Within the world of the spirits, our young heroine befriends certain people who help to keep her safe throughout her journey – most notably Lin (Tamai) and Kamaji (Sugawara), two workers of the bath house who know her secret. Her largest obstacle comes in the form of the sorceress Yubaba (Natsuki), who attempts to steal her name and identity by renaming Sen.

Many have rightfully compared Spirited Away to Alice in Wonderland, but Miyazaki gives this world and its characters a heart that’s rare to find in an animated film. Due to Hayao Miyazaki’s disdain for computer animation, he draws thousands of frames himself for each of his films, including this one. The quality can be seen in the extreme details he gives these frames, most notably the lush sceneries he creates and the almost realistic feel he gives to the water movements.

Not only is the animation gorgeous, but the development that the character of Chihiro goes through makes for truly impressive writing. Starting off as a relatively depressing and whiny girl, she progresses and matures throughout the film into a smart and brave young woman that takes on some truly overwhelming obstacles. It is thankful that there are men like Miyazaki in the world who give animated films the female characters like Chihiro, as well as Lady Eboshi from Princess Mononoke.

John Lasseter of Toy Story fame did a wonderful job supervising the dubbing, using the voices of Daveigh Chase and Jason Marsden for the characters of Chihiro and Haku. One of the things that stood out the most was the gorgeous score that Joe Hisaishi’s composed for the film. His simple use of the violin and piano set the tone for this movie beautifully alongside Miyazaki’s animation, and have an increasingly powerful effect on each scene, even after the film is done.

Spirited Away is by far one of the most visually stunning animated films that has been made. Not only is the animation fresh and crisp, but the film has characters full of depth and emotion, a steadily progressing storyline, and a breathtaking score that leaves you longing for more. It is a further reminder that Hayao Miyazaki is a true master of animated film, and that every single movie he makes truly brings a little magic to the lives of millions. It has been claimed on more than one occasion that this movie is Miyazaki’s masterpiece, and in all honesty, they might just be absolutely right.