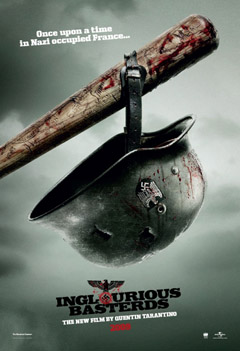 The Inglourious Basterds are the super secret group of Jewish-American soldiers sent to occupied France to kill and scare the freaking Nazis. And as Lt. Aldo Raine points out, “They ain’t in the prisoner-takin’ business; they’re in the killin’ Nazi business. And cousin, business is a-boomin’…” So expect a bit of bloodshed and some more killing. After all, this is a Tarantino film.

From the first scene to the very last, you’re in for a thrill ride, which is no small feat when you have an idea where the film might be going, but you end up all the more satisfied when it does happen. From the crude and unsophisticated Lt. Raine, to the suave and educated but vicious Col. Landa – a glass of milk has never been more threatening.

The film blurs the lines of good guys and bad guys. While in most Nazi-themed films you see them performing the most horrendous acts until the good guys arrive, in Basterds you’ll see the so-called good guys doing all the beating and killing, while most Nazis beg for their lives.

Filled with dark humor, irony and violence, the film is not for those easily offended fellas. For the rest? You gotta watch this. No, really. Stop wasting your money on so much crap.