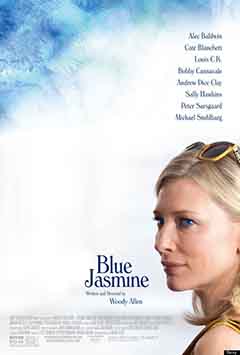 Though the words, “I’ve always depended on the kindness of strangers,” are never uttered throughout Woody Allen’s latest Blue Jasmine, the air of Tennessee Williams’ A Streetcar Named Desire lingers all around.

Recently widowed and left broke by a cheating, lying husband (Baldwin), the mentally unstable Jasmine (Blanchett) finds herself living with her sister Ginger (Hawkins) in order to survive. While trying to get her life back together, she constantly stumbles in realizing she’s not the rich woman she once was, making life harder for all those around her.

As amusing as some of the jokes spread throughout Blue Jasmine are, there is very little that is actually amusing about the rather dark film Allen presents. He creates a character that’s hard to sympathize with, but almost fascinating to watch. Jasmine is a nervous wreck of a human being, and that anxiety is depicted impressively on screen.

Scenes where she interacts with human beings that don’t include her sister are clearly intended to leave one feeling uncomfortable. There’s a scene where an unbelievably forward dentist, played by Michael Stuhlbarg, that Jasmine works for sexually harasses her, literally forcing her into a corner before stumbling, allowing her a chance to escape. At this, and a scene where Bobby Cannavale’s character Chili yells and tears apart the house, people in the theater laughed.

Maybe the laughter that some got out of it is an attempt to relax after an unnerving moment, but these are moments of sheer horror for some. It’s this immense focus on anxiety, with Jasmine constantly popping pills and drinking alcohol in hope of some relief, that makes her an interesting character. And It’s Cate Blanchett that makes Blue Jasmine a compelling watch on occasion, plain and simple.

Her performance is one of the best in Allen’s recent work, showcasing a woman desperate to put herself back together, but unable to face the fact that she is broken. In terms of direction that complements the performance, Allen is at his best when he features flashbacks of Jasmine’s life, comfortable in the open spaces of the upper class world. While Jasmine has some genuinely amusing and heart-breaking moments, she’s also faced by some problematic and dated storytelling issues that Allen utilizes.

Ignoring the fact that Jasmine has a perfect knowledge of her smart phone, but has to take computer classes for fashion school (what is this? the 1990s?), Allen provides the film with some bigger problems: men. It’s clear that he attempts to place the women at the forefront of the film, but when Blue Jasmine seems almost dedicated to undermining its female characters with every move, it makes one wonder whether any of them are actually all that well written.

Jasmine’s constant self-sabotage, even with the man she begins to fall for (Sarsgaard), makes sense along with the progression of the film. Ginger, however, gets an awkward romantic b-plot with Louis C,K. instead. Anyone who sees this not knowing who C.K. is beforehand will wonder whether he’s just a tired actor off the street, and that’s a shame. Even Sally Hawkins deserves better than the tiresome role she gets, bouncing from man to man to man. The men may be expendable, but Hawkins gets the boot too simply because this is all Blanchett’s show.

Blue Jasmine a cramped little film that doesn’t revel in its locale like Allen did in Paris [1] or Manhattan and treats its characters rather poorly, even when it wants you to be interested in them. While Cate Blanchett’s acting is always a pleasure to witness, it’s a rather average and anxiety-inducing piece that could have been better with some polishing and a better focus on Jasmine and her past.