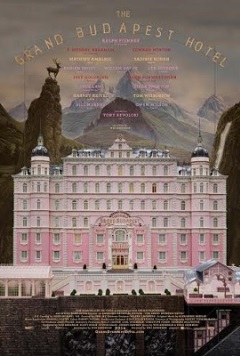 The Grand Budapest Hotel‘s opening features a young girl in present time reading the book about the hotel, whose author is voiced and played (in old age) by Tom Wilkinson, and then the Author takes us back to 1968 when his younger self (Law) meets the Grand Budapest Hotel‘s current owner, Zero Moustafa (Murray Abraham, played by Revolori in its young version), and talks about how he managed to own the place. The current owner takes the story back to 1932 around the hotel’s final glory days when he started to work at the Grand Budapest Hotel as a lobby boy and learning everything from Gustave (Fiennes), the hotel’s concierge who has tremendous devotion for his workplace and loves to sleep with his old female customers.

Some time later, Gustave learns that one of his biggest customers, Madame D. (Céline Villeneuve Desgoffe-und-Taxis, played by Swinton), has passed away and he attends the wake and the reading of the will. It is in the latter where Gustave inherits a very valuable painting, which royally pisses off Madame D’s family, especially her son Dmitri (Brody), and they put Gustave’s life in trouble in wacky and bizarre ways that could only happen in a Wes Anderson film.

It’s always a treat to watch Wes Anderson’s films for the visual quality and quirkiness that he stylishly displays and delivers. Watching The Grand Budapest Hotel on a big screen felt rewarding from a visual standpoint — every scene practically yells the director’s name — and a “better-than-expected premiere date for my country” point of view (Peruvians got to see Moonrise Kingdom back in October 2012).

While The Grand Budapest Hotel stands out in Anderson’s film resume for its dark content and characters [see: Brody and Dafoe’s characters], as well as setting itself in a Europe that is about to enter into World War II, and featuring gorgeous production values and art design, I wished that it could have been much better. Maybe it’s because of me having higher expectations considering Anderson’s talent, but The Grand Budapest Hotel presents a severe unbalance of style and substance. The film wasn’t very hilarious (except for Fiennes and Brody) and its tone oscillated heavily between being deep or shallow in uneven fashion, which made the film drag at times due to the plot’s direction, especially during the second third of the film that felt a bit tiresome and draining to watch, especially when Fiennes isn’t around.

The best act in here is Ralph Fiennes by a very long shot, and this isn’t only due to Gustave getting the most character development when compared to everyone else – He showcased great comic timing and adapted himself smoothly to Anderson’s lines and direction with subtlety, making the film feel alive and vibrant when he’s present. Gustave is shallow and vain for the most part, but Fiennes doesn’t go over the top with it, he’s always fun to watch and he even displayed human moments when it came to Gustave’s sincere moments with Zero. This is easily Fiennes’ best performance in years and deserves to be considered for awards nominations, even if it’s too early to predict nominees right now.

As far as the supporting cast is concerned, Adrien Brody gelled well in his interactions against Fiennes, while Saoirse Ronan (who played Agatha, Zero’s love interest) looked adorable to watch in her few minutes of screening. However, it was frustrating for me to see most of the big names Anderson employed as hit-and-miss cameos (some of them being forgettable). However, I’ll admit the great makeup on Tilda Swinton’s character made her unrecognizable. Moreover, Zero was a mixed bag: young Zero was a not-so-interesting wallflower character, and old Zero displayed an interesting past. While Tony Revolori was good at being the naive good guy, I wished Anderson could have quirked young Zero a bit more instead of holding him back with limited expression range. In contrast to young Zero, F. Murray Abraham as old Zero was fantastic at narrating his connection to the hotel, his relationship with Gustave and some of the saddest moments of The Grand Budapest Hotel with emotion and passion.

Despite my thoughts, I’d still suggest anyone to watch it because of Ralph Fiennes and Wes Anderson — who is always the biggest star in his own films — along with the production design and visuals of The Grand Budapest Hotel. Maybe in a second watch I’ll like the film more and even recommend it, but some aspects felt off for me at the first viewing.