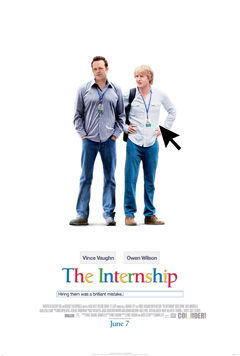 I’m not really a fan of Vince Vaughn or Owen Wilson; and while I’ve seen Wilson scattered through Wes Anderson (The Darjeeling Limited) and Woody Allen (Midnight in Paris), I haven’t seen the both of them since Wedding Crashers. It’s been a really REALLY long time.

In The Internship, they face every non-tech forty-something’s dilemma when they lose their jobs as salesmen: they need to evolve or die trying. While Nick (Wilson) does get a job to sell mattresses under his crazy and pervy brother-in-law (Will Ferrell in a cameo), Billy (Vaughn) gets the brilliant idea to get an internship at everyone’s favorite dream company (outside of Pixar) Google — where there are nap pods, and everything at the coffee shop is FREE — and just skate his way through the technical glitches as the savvy salesman that he is. After selling mattresses proves too much, Nick readily joins him, of course.

In theory everyone should have an idea that The Internship is a… a long-form commercial — a HUGE product placement placeholder — for Google, and they tell you right away. They’re using Google as a brand (as a place, as a device in the plot, as a company motto, etc.), and as such the production needed the company’s approval or they couldn’t have gotten to use the name. That’s as straight as the content of the film goes.

Here’s the crazy thing, I didn’t hate it. Yes, it’s flat-looking like much of Shawn Levy’s filmography (with such visual gems such as Cheaper by the Dozen, Night at the Museum and Date Night), but it did made me laugh, at least in the first half. I still believe it’s a little odd that people in their mid-40s would be completely null when it comes to technology, even my mom knows about Google cars and she’s averse to machines, so I’m uncertain on how effective the tech jokes worked… but I laughed. All the C++, the Charles Xavier and Harry Potter jokes, they were all funny. There was no hollering like it sometimes happens whenever I hear Bernadette or Amy speaking in The Big Bang Theory, but there was fun to be had.

Though the film drops most of its humor in favor to develop this underdog story, in which Nick and Billy alongside the unwanted-Nogglers the snobbish Stuart (O’Brien), the sexual-deviant-bookworm Neha (Sircar) and the over-achieving home-schooled Yo-Yo (Raphael) all lead by head Lyle (Brener) who must overcome the team of their evil-Brit nemesis Graham (Minghella). The Internship is also about the lives of these outcasts who learn to live a little… outside in the real world, and there’s a good (albeit repetitive) message in there that gets sidetrack by the inclusion of Rose Byrne as a possible love interest for Wilson- that’s a good 15min. you could’ve taken out of this.

I also didn’t care that most of this ‘transformation‘ from tech-obsessed me-oriented to team-player happened during a strip club scene. Besides from that? This is as vanilla as it comes.