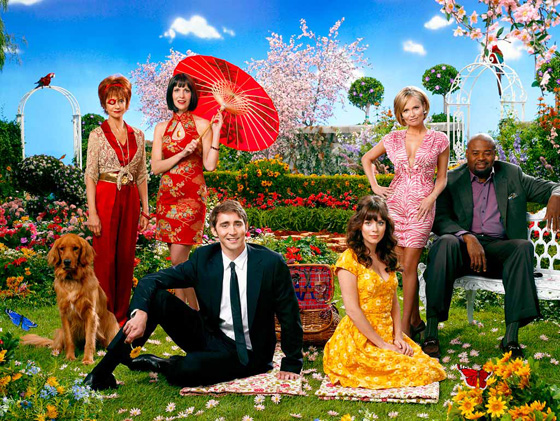 This is it! My 50th television review, and I wanted to make it something special. It ended up being Pushing Daisies, which I haven’t re-watched since the series was released on DVD, and my love for Bryan Fuller was cemented in its whimsical obsession with death… extended from the exploration of it through Dead Like Me [1] and somewhat continued with Hannibal. Admittedly, with a brief stint in Mockingbird Lane.

Though I would consider myself a bigger Joss Whedon fan, I’ve watched more of Fuller’s series, partly because very much like his obsession with death, they also seem to kick it early. If Hannibal makes it to season 3, it’s gonna be the longest Fuller’s EVER gone with a show — TV Movies notwithstanding. He seemed to have struck some kind of magic with the whimsical Pushing Daisies — part fairytale romance, part quirky crime mystery solving, part snarky comedy food-loving musical and more; Pushing Daisies achieved a stroke of genius uniqueness that is hardly ever going to show up on television again.

Before the whole “boy meets girl” story can begin, we must meet Young Ned (Field Cate) who discovers he can bring people back from the dead with just one touch. The catch? If he touches them again, they’re instantly taken back to being dead to never be revived again. Moreover, if the dead stays alive longer than one minute, something in close proximity must die in its place.

As a grown up, Ned (Lee Pace) becomes The Pie-Maker at The Pie Hole, where he is aided by his lovelorn waitress Olive (Kristin Chenoweth) and pestered by private investigator Emerson Cod (Chi McBride), who uses Ned’s unusual gift to ask the dead and solve his cases to get the reward money. It is in one of those cases, where a woman — deemed ‘The Lonely Tourist‘ by the media — was killed and dumped overboard when she was returning from Tahiti, that Ned finds that his childhood sweetheart ex-Coeur d’Coeurs neighbor and first crush, Charlotte Charles or simply Chuck (Anna Friel) was dead. When Emerson and Ned visit the funeral home to question Chuck about who killed her, Ned — with encountered feelings and a lack of brain functions — revives Chuck for more than one minute, initiating her life as a living-again person.

It’s a case of Boy re-meets a Dead Girl!

As Emerson, Ned alongside Chuck solve crimes, Olive suspects her love prospects with Ned cooling off, that Dead Girl isn’t really dead, plus a HUGE realization on behalf of Chuck’s aunts Vivian (Ellen Greene) and Lily (Swoosie Kurtz) who had been dealing with Chuck’s passing, leading to Maria von Trapp territory with a special appearance of Diana Scarwid (Wonderfalls)! Phew, I think I got most of that.

Pushing Daisies is wordy, which can get in people’s nerves if you’re not in the mood for over-talking and quirky wordplay. The dialog would be typical pop culturally self-referenced, a bit similar to Whedon in the most Buffyesque dialog with the geeky ramblings of Willow combined. It gets a bit long-winded as a re-watch, making the chemistry between Ned and Chuck fizzle a little after a re-watch, but the banter with Olive and Emerson keep the magic alive. Especially Chenoweth, she’s a genius in here stealing every scene she’s in. It’s like her sweet high-pitched tone of voice and singing vocal chops go in contrast to some of the sarcastic off the bat things she’s got to say against the sweet as pie visuals that the show boasts with. And there’s dead people — mangled, squished, limbs torn off, etc — talking. What more can you ask for?