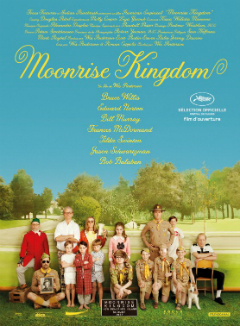 There was a moment during the showing of the movie that I went: what in the world am I watching? Then I remembered this is a Wes Anderson movie and suddenly I didn’t need to understand what I was watching and just fully enjoyed the visuals.

See, I have enjoyed many of Anderson’s movies before. Not that they have all made that much sense to me, but they are funny in a very quirky way and I happen to think that quirky funny is the best thing in the world. With Moonrise Kingdom we get a whole lot of that, but set during the 60s on an island far away from anything and with boy scouts to boot – it just has all the elements to be cute.

Anderson does cuteness really well and what I appreciated here were our heros, Suzy (Hayward) and Sam (Gilman) — they are both kids on their way to being teenagers, they are both slightly special and they are both perhaps a little lost. They understand each other perfectly, so they decide to run away (for what reasons, it’s a little unknown) from it all. A hilarious search ensues, a storm arises and young love has never been this peculiar.

Personally, I adored that the love between Suzy and Sam is slightly awkward with a bit of honesty in it. I was just reminded about how painfully unsure everything was at the tender age of… 12-13?, when love was the thing that made your chest set on fire but the nervousness in your stomach roared like a tsunami. It was all so conflicting, scary, exciting and lovely – pretty much what Moonrise Kingdom is as a movie. It really sets you on a humor/emotion ride and you can’t but love it. Reminds me a little bit of The Royal Tenenbaums (which is by far one of my favorite Anderson movies).

Although our young heroes steal much of the thunder in this movie, the adult cast did get their time to shine. With Anderson regulars Schwartzman and Murray and with the great addition of Swinton, Norton, Conrad and Willis, Moonrise Kingdom is just cool because of that. It was a potpourri of great stuff.