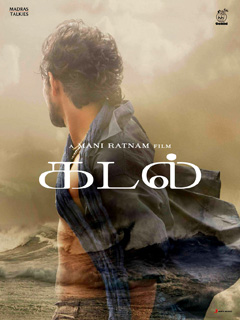 Except for Hey Ram, I think my Indian movie-reviewing has stuck to Hindi movies, mainly because I’ve found it difficult to find regional films with subtitles. I’ve seen just a couple of handful of them, and though I’m not too fond of the Telugu industry (maybe, yet), I took an early easy like to Tamil movies thanks to Kandukondain Kandukondain and other Kamal Hassan work, and while I haven’t explored 80s Ratnam yet, I learned early on my journey he’s one to keep an eye on.

Ratnam follows his 2010 Stockholm-Syndrome-riddled Tamil-Hindi Raavanan–Raavan with the religious revenge romance musical drama Kadal — yes, that’s right — the story of wealthy Sam Fernando (Swamy), who enters the monastery to become a priest. In there he meets boisterous Bergsman (Arjun), who ends up leaving for a worse life trying to just survive with the words that one day Sam will know that evil reigns supreme in our world. Years pass by and Sam becomes the priest of a remote fishermen village, where he meets a fatherless rowdy boy, whom everyone mistreats and whom he names (and kinda adopts) Thomas (Karthik).

While all the films in Ratnam’s filmography boast of beautiful cinematography, Kadal generally follows through accompanied by the ever-present soundtrack by his longtime collaborator A.R. Rahman, with Arvind Swamy off his semi-hiatus since 2006 as the cherry on top. It seemed like old school Ratnam was back for fans of his 90s era, however, the muddled script outshines the most interesting aspects of the film, which is the exploration of revenge and redemption.

Arvind Swamy and Arjun worked really well with their characters and opposite each other, despite how forced it seemed to see Bergsman setup Father Sam, which gives way to loads of mob-mentality action — there’s some attempted lynching, a death framed as a murder (that’s right!), and there’s a lot of name-calling and denouncing. But it’s all there like an interpretation of the Passion of Christ with Father Sam (beard and all without the flagellation) as the representation of Christ himself, which did offend Christian communities (or parties?) in India… because who isn’t?

However, all of this might-have-been beautiful imagery gets muddled up in between Thomas’ love story with Beatrice (Nair), who -to be fair- does get a backstory, but not much to work with in her present. I get it, the love Thomas has for someone is what makes him different to Bergsman, despite him trying to teach the kid the kinks of the dark side. Nothing against Karthik, he’s a good looking guy, but the feelings his character goes through has nothing on the tension built between the other two actors, despite his arc being the most important in the story. How bakwas is that?

Overall, though, Kadal is better than most highly-rated stuff on IMDb or by some (Indian) newspapers critics. It’s definitely not the best of Ratnam’s work, and while I don’t think it surpasses Raavanan visually, it was much more palatable.