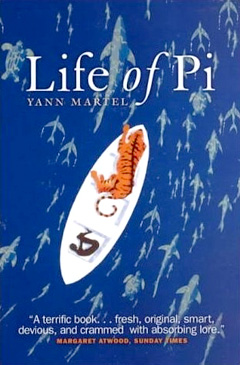 I don’t feel I’m the right person to be reviewing this book, but I guess I have to get back on that “reading” horse. I haven’t read much this year, so it seemed perfect that Life of Pi came into my life, especially now that Ang Lee’s vision of it is upon us [Trailer].

Life of Pi follows the life of an Indian boy named Piscine Molitor Patel, often taunted as “Pissing Patel” by his classmates — a boy who grew curious of religion and became not only a practicing Hindu boy, but also a practicing Christian and a practicing Muslim, which caused more than one awkward and funny encounter.

Pi, as he would later rename himself, lives at the Pondicherry Zoo as he is the son of a zoo owner and thus has grown up surrounded by unusual animals, giving us amusing insight in the lives of the colorful not-so-wild-beasts that populate the Pondicherry Zoo, combined with a fresh curiosity for faith. I must admit, as a raised Catholic and self-professed agnostic, I did feel a bit judged by some of Pi’s harsh comments on the difference between agnostics and atheists — it’s not about not knowing what to choose, it’s just that choosing a religion doesn’t matter. I’m just saying.

Yann Martel’s writing is descriptive and becomes alive in the imagination, and it all becomes and endurance test in the second part of the book and the real adventure begins at sea, with a boy stranded on a boat with a zebra, an orangutan, a hyena… and a Bengal tiger. Some of those passages in this section are graphically horrendous, I’m leaning to think this description was even more brutal than the “no-animal” version described by the end of the book, even though both were horrible. The detail in which Martel wrote one prevailed in my mind longer than the other, though. The abrasive structure of those descriptions turned my face in shapes that I haven’t done in a while.

However, I have not much of an idea what to take from this book — maybe it’s because I’m not much of a religious person — but I didn’t finish it off with lifted spirits. What I imagined was a boy in a tremendously unusual circumstance witnessing terrible things, having to adapt and make do with whatever he had to make it through one more day… even with a bit of faith.

Because it was a lot less horrendous than the non-animal tale.

Or maybe I took that we all have a Richard Parker inside.

Or maybe I really am agnostic and I can’t decide.

Wanna give me your five cents on the religious themes on this book?