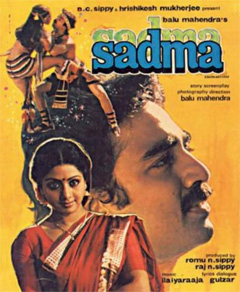 I’m going to be a little unorthodox and write a double feature review, because in a rare commercial turn of events, these Indian cult classics are practically the same movie: same story, same cast, same crew. Just slightly little changes. After being quite popular in (some say, film crazy) Tamil Nadu in 1982, Moondram Pirai also nabbed Actor, Actress and Director awards and nominations; the Bollywood film industry took notice and released a re-shot Hindi version of the film with the same cast and crew to less commercial success but still nabbing noms at the Filmfare Awards.

The film begins when a carefree Bhagyalakshmi/Nehalata (Sridevi) gets into a terrible car accident suffering a blunt head trauma that makes her forget many years of her life, rendering her a small child in the body of a young woman. Her parents decide to keep her at a mental hospital at the suggestion of the doctor,  but that takes a turn for the worse  when she is sold to a brothel, where she meets the good-natured Seenu/Somu (Hassan).

One might think that Moondram Pirai/Sadma would turn into the most depressing tale of a young woman at a brothel, or some kind of whack Pretty Woman rip-off, but it’s neither of those. Taken by the childlike qualities (which he mistakes a solely helplessness) of the young woman he knows as Viji/Reshmi, he takes her from the brothel — without knowing that her parents are looking for her — to his home in Ooty [1] where Viji/Reshmi is welcomed by the people who live with Seenu/Somu.

While you question yourself how a man and a young woman who has regressed to the state of a child could even try to fall in love with each other, I would argue that they don’t, despite some people labeling this a ‘romance.’ Yes, there is a relationship build-up, but it goes beyond the romantic aspect of love- It might start out as a possible romance, a supposed hero complex of wanting to save a girl that begins a friendship and settles for guardianship, that strange bond of parent and child.

There is a moment that seems to support that idea, in which Hassan’s character gives Sridevi’s a sari, which she’s all too embarrassed to receive (aww shucks). However, after a musical sequence in which Sridevi magically cures her amnesia wearing the hell out of that gifted sari, we are (and so is Hassan’s character) presented with reality: Sridevi can’t wear that lovely sari, at least not yet. All the games played, the knowledge imparted, all that taking care of, and all that worrying… it all builds up to that most heartbreaking scene, in which Sridevi returns to being Bhagyalakshmi/Nehalata and stops being that puppy-loving ‘child.’ She leaves us hanging, holding onto that something that might magically make her remember, and you keep waiting and waiting, holding onto that little bit of hope because there is still a little bit of film left.

It’s a terrible feeling, but it’s so good that a film stirs all of that within its last minutes. They’re performances for the ages — Hassan has had plenty of chances to give great performances, but I don’t think Sridevi has ever topped this, even if English Vinglish comes close. And, yes, even compared to some of her most popular roles like in Lamhe, ChaalBaaz, Chandni or Mr. India.

As far as remakes go? The only thing Sadma improves on is that Sridevi’s child wardrobe helps with the contrast in that sari scene and accentuates the childlike qualities of her performance. As a stand-alone film, it’s good, but you gotta question the need to re-shoot the whole thing when Moondram Pirai exists.

You can check Sadma on Shemaroo’s YouTube Channel, but subtitles don’t seem synced.