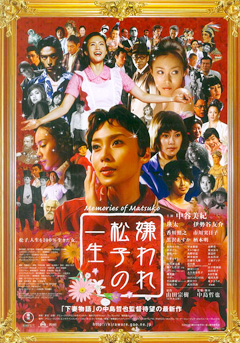 I have very deep feelings for Tetsuya Nakashima’s adaptation of Memories of Matsuko — which has also been adapted into a Japanese drama that I have dared not look at. My reason is simple, Matsuko’s story is painful and emotionally draining, yet Nakashima’s acid hyper-reality view on it makes it palatable and… even fun.

Of course, films like this where many perfect little pieces work with each other in perfect harmony don’t occur very often. Even though Miki Nakatani shines as title character Matsuko throughout most of her life, it came at the price of a very exhausting relationship between director and muse. In an interview, Nakatani even said that she would doubt accepting work with Nakashima again — in stark contrast to, let’s say Nicole Kidman with Lars Von Trier… or very similar to Bjork with Von Trier, who vouched to never work on a film ever again.

The basic premise of the film is straightforward drama, following the life of Matsuko Kawajiri (Nakatani) making one bad decision after the other, meeting people and straining relationships that will eventually lead to her tragic murder. As regular people, we may look at Matsuko with disdain as her actions and surroundings begin making her a complete outcast of society. However, through the lens of Tetsuya Nakashima — and ultimately through the eyes of Matsuko’s nephew’s Sho (Eita) — we see the violent misadventures cast with a colorful and quite shimmering clout that was Matsuko’s life of giving without ever taking.

Every little girl dreams of being Snow White, Cinderella… of living in a fairytale. Then we wake up one day and see our white swan has become a black crow. One life is all we get. If it’s a fairytale… it’s a cruel one.

The agonizing scenes of Matsuko’s violent relationships, deceptions, rejections and depression all painted with broad strokes of Disney animated sequences and sugary musical numbers resemble Von Trier’s heroine Selma in Dancer in the Dark quite a bit. Though while Selma escaped the cruelty of her world with musical numbers, Matsuko was a dreamer and escaped reality when things seemed to be too good for her… very much like Audrey Tautou’s Amelie.

This heroine’s tragic story explores the ideas of love — self-love and selfless-love — viewed through the eyes of a loving daughter, a caring elder sister, a teacher, a lover, a “masseuse” girl, a yakuza girl, a friend, and an outcast finding her way back home. Nakatani makes the role solely hers and leaves her “film history mark” with it, alongside an impressive supporting cast (and cameos) that boast some of the who’s who of Japan contemporary cinema (and pop culture).

Of course, Memories of Matsuko doesn’t lack its own faults, the main one being the lagging beginning that doesn’t really grab you in the first 40 minutes of the film, but by then one is already emotionally invested in Matsuko’s life. And once the film is over, the film pays off not only with its visual appeal, but also emotionally when we hear that final “Okaeri” (Welcome back) that Matsuko so longed to hear throughout her whole disastrous life.