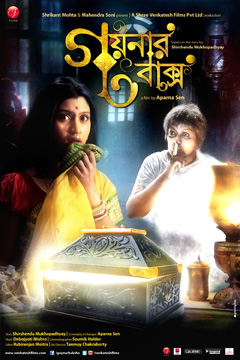 My fandom relationship with Aparna Sen (as either filmmaker or actress) is skin-deep, and I have to admit that my knowledge of Bengali films is non-existent, but boy do I love Konkona Sen Sharma, so I couldn’t resist watching this adaptation of Mukhopadhyay’s novel and short story.

Married off at the tender age of 11, Bengal Hindu Rashmoni (nicknamed Pishima, later played by Moushumi Chatterjee) widowed shortly thereafter, condemned to an early life free of the earthly thrills — hair chopped off, unable to remarry, or even able to taste flavorful food or wear colors other than plain white [See: Deepa Mehta’s Water or Sen’s own The Japanese Wife]. Bittered by her cruel fate, Pishima’s only saving grace is her precious jewelry box filled with 5kg. of gold anklets, necklaces and bracelets, which is the only reason her family stands her… that is until she croaks.

However, before her surviving relatives can salivate over her jewels, Pishima’s ghost establishes a one-way relationship with Somlata (Sen Sharma), her stuttering niece-in-law, who helps her save her precious box, and in turn expands the story into three generations of women.

What could have been an artsy tale of strong feminist tones weaved through a historical period in West Bengal ends up being -almost- an accessible film about a family that’s not always looking to do the right thing… three very strong women, including a mischievous aunty ghost. The paranormal aspect is tricky to do, it can definitely kill the mood of a serious piece, but it looks like Aparna Sen wanted to keep the tone of Goynar Baksho down with comedic moments that never went over to sweeten it. Moushumi Chatterjee’s Rashmoni is as charmingly unlikable as any of the Jack Nicholson’s characters in As Good As It Gets or About Schmidt, only she’s surrounded by a lot of other people with little virtues except for Konkona’s Somlata who, despite being overtly naive about her surroundings, makes it through almost like a champion to raise a baby girl that becomes a fully-educated independent woman (Biswas) involved in the political going-ons of her era.

Except for the ghost effects — and the Comic Sans spotting in the opening credits which gave me children’s movie vibe — I would say that production value was pretty good; cinematography and production design gave way to some really nice scenes and moments surrounding the actors, who did a wonderful job. I just felt a little disappointed that most male characters were lousy with no redeeming qualities at all, defeatist in their social standing as solely land-owners who couldn’t do anything else but live off land-owning, though Saswata Chatterjee plays his role to a tee, his character goes in stark contrast to Somlata’s non-apparent willingness to get out of the hole.

Oh, who am I kidding? I enjoyed Goynar Baksho a lot mainly for my bias for Konkona Sen Sharma [1], but I ended up loving the resolution so much that I went looking to see if there was an English translation of the book (or the short) available. I didn’t find anything, but if you can help me out, I’ll be grateful forever.

Here’s the trailer with English subtitles to give you a better idea.