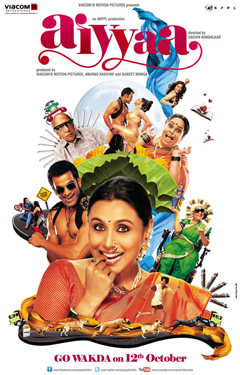 A lot of people would be turned off from watching Aiyyaa due to its dismal IMDb rating, and watching the musical numbers on YouTube without their context would leave you quite embarrassed for its lightly-clad Heroine, especially if you’re not a hardcore Rani Mukerji fan and scoff whenever something non-Bollywood (or non-Hollywood) ends dripping into your life. Admittedly, I caught the film at a time when I was getting to know Rani, I barely knew Madhuri, Juhi or Sridevi, and I had no clue there was such a thing as films in Telugu, Malayalam or Tamil etc. at all.

A film like Aiyyaa made no sense to me at all. It flew right over my head. I laughed and winced at that time because Aiyyaa~ it does have some funny moments, but that experience doesn’t compare to how much I laughed this time around. Whether that’s a Rani Mukerji bias I got or a newly-found sense after a string of more varied Indian filmi… I’ll let you decide.

In here Mukerji plays Meenakshi, a late-20s-odd-30s-year-old single daydreamer with a keen sense of smell that whiffs through her working hours, family life — dog-lover of a bro Nana (Wagh), parents who can’t wait to get her married (Sawwant + Alekar) and a blind grandma (Subhash) who’s a good observer — and somewhat stagnant love life with reenactments of Madhuri Dixit, Sridevi and Juhi Chawla numbers… that is until she meets the brooding artist Surya (Prithviraj) and she starts getting all these filmi southern-flared sexed up musical fantasies.

I didn’t notice it the first time, but Aiyyaa has a distinct Amelie flare at times. Besides being about a peculiar young woman with a hyperactive imagination, the song Mahek Bhi [clip] — as well as the musical cue used throughout the film — has a certain Yann Tiersen Frenchness to it. Of course, the strength of the movie isn’t about that, but its off-beat comedy that plays with its Bollywood nature sprinkled with some good amount of Tamil-Nadu and wrapped into a rather tame -but still rather out of the box- unapologetic sex comedy of sorts. For the past couple of years, film heroines have been shedding clothing on screen to the dismay of wholesome families, at least we got a blunt reason for it here. Rani even gained weight for the role and she played it accordingly with, I hope, no regrets. It was a little surprising during a gasoline scene in the Aga Bai [clip] number (not included in the link), but reached high levels of awkward discomfort during the second half with Meenakshi’s brother Nana and her John-Abraham-crazed co-worker Mynah (Date), who is almost too much for words.

What works against the brilliance that is the first half of the movie is, of course, that you can’t quite keep up the level of madness that you had going. Mukerji’s wide-eyed straight forward innocent performance as well as her complete abandonment during the fantasy sequences make the better part of a story that almost feels too random, but it’s actually a little too straight to be Wakda. It’s the story of a girl who doesn’t really think about marriage, but if she’s to get hitched wants to do it for love. A part of me wanted Meenakshi — with all her stalkery tendencies — to accomplish something else by the end of her journey… maybe that she doesn’t really HAVE TO get married, even if she’s into the hot sullen artist.

Other than that, Aiyyaa is the perfect piece for a triple feature alongside Ghanchakkar and Hasee Toh Phasee.

You can check out the movie over at EROSNOW.