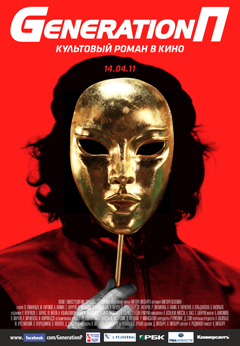 This is probably the shortest review I’ll write in a long time.

My literary knowledge pales in comparison to my contemporary film mental database, but you can’t really miss the chance to watch a movie whose poster reminded me of a golden-coated Anonymous to the silhouette of Che Guevara.

Thought to be “unfilmable,” Pelevin’s novel of the same name follows young Babylen Tatarsky (Yepifancev), an apathetic young man in the ever-changing days of post-Communist Moscow, who, as destiny would have it, would become one of the forces behind the Russification of Western marketing to become the chief creative behind the virtual world of Russian politics while consuming immeasurable amounts of cocaine, vodka and the seldom consumption of magic mushrooms.

It’s the advertising version of The Wolf of Wall Street. Sorta. Without the sex.

While Tatarsky’s character arc follows a regular slope, unlike the curve of the rise and fall of DiCaprio’s Belfort, what makes Generation P quite the exceptional adventure are the near-psychedelic visions that Tatarsky gets to climb up the marketing ladder with witty soviet puns for western products and off-this-world technology that would create the downright scary virtual reality that these characters end up inhabiting, and we may-or-not be living in. There’s a certain sense of bakwas beauty to the chaos, you really have no idea what is going on at certain points in the story, as the stakes to our protagonist’s grow bigger his visions become crazier, and the line between his delusions and reality blur.

Though I’ve found that Russian movies tend to be very impersonal, even when dealing with drama, I don’t think it would have helped the audience to get close to Tatarsky. At certain parts, the style and pace feels like something out of Sion Sono’s Love Exposure, but making less sense in a different bizarre way. The main attraction to Generation P is definitely the presentation of mass manipulation via advertisement, and how everything around us is built around brands and what they’re selling to you. It sounds like it might turn into an anti-capitalist (or anti-American) piece, but it turns into more of an anti-establishment (not necessarily just Russian). It just takes all our perceptions of how the world works, and puts it into this nonsensical platter of alternate realities.

It’s just… hard to explain into words that would make sense without losing the essence. Just sit down, absorb it, and take it as an experience.