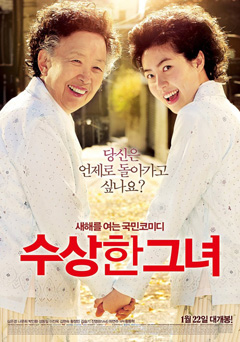 Ageism is the modern age old question, especially in an industry as superficial as the movies, regardless of country of origin. Old people are either cute or grumpy… and they smell weird, at least that’s how we’re supposed to think of them starting out Miss Granny, as we’re introduced to 74-year-old Oh Mal-soon (Na), one of them old people who live a pretty simple life on the periphery of our busy day to day lives working at a Café for senior citizens. However, she’s not your regular old lady, as her best friend forever-in-love Mr. Park (played by Park In-Hwan, heh) suffers a blow to his nose as he tries to stop Oh Mal-soon from kicking someone’s butt after going on and on about whose son treats the other one better.

At home, things aren’t much different as Oh Mal-soon’s constant nagging to her daughter-in-law (Hwang) drives her to the point of mental and physical injure, pushing Oh’s loving son (Sung) and her equally ‘charismatic’ granddaughter (Kim) to discuss putting her in an old people’s home against Oh’s pampered grandson’s (Jin Young) will, who at 18 years old is still trying to make his metal band happen.

Downhearted by her future (or lack thereof), Mal-soon is waiting for the bus when she sees a photo studio suspiciously named Forever Young, whose photographer promises to make her look years younger only to find herself a 20-year-old gal (Shim) once again, which is -of course- the genius of it all. Sure, we’d call Sunny an incredibly funny ensemble piece where everyone got to shine a little, crushes were formed, but here Shim Eun-Kyung just shot right to the top with a humor-packed and heartwarming performance as the ahjumma trapped in a young woman’s body, Oh Doo-ri.

My mother told me that my grandfather used to tell her he was going to die every single time he got the flu ever since she was a child. In the end, he got to live such a long life that we’re not even sure about the real year of his birth. He joked around with very dark humor — he was a globe-trotter, you see — probably had a fling here and there, and he definitely had his grumpy days. This whole essence of living a full life is perfectly exemplified in Na Moon-Hee’s performance, who doesn’t really get to spend much time on screen but gives her imprint for Shim’s pitch-perfect take. Dialog and situations are really funny, especially when Oh Doo-ri celebrates with her unsuspecting grandson and starts spanking his butt, which is still the biggest culture shock I have ever experience with friends.

The film gets emotional, of course, telling us that even grumpy people who nag all the time (and could have ruined a person or two on their way) have a reason to be the way they are. You really have to have the emotional range of a teaspoon not to know that older people have a deeper life experience than us, so the ageism issue presented in the film doesn’t go far, but Miss Granny manages to entertain all the way through.

And I actually squealed by the end.

The screening times for Miss Granny at KOFFIA are: