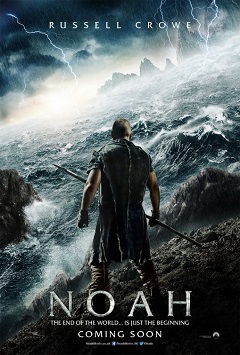 Before its release, my curiosity in Noah has to do with two simple reasons. One, Darren Aronofsky is directing a film once again, and two: I wondered how a director of his calibre would adapt the religious tale of Noah’s Ark, considering his past films as well as Noah’s tale being pretty short to read. For those who haven’t read the tale of Noah’s Ark in the Bible, it’s about the man who is chosen by God to save all the species before an apocalyptic flood cleanses the world.

In Aronofsky’s take on the Biblical tale, however, Noah (Crowe) is haunted by vivid dreams of a great flood, which takes him and his family to visit his grandfather Methuselah (Hopkins). This visit, which includes Noah receiving a seed from Eden and learning about the truth regarding his visions, sets in motion the creation of a giant ark for the salvation of all the animal species before Noah’s visions of the apocalyptic flood turns into reality.

As if building the ark and dealing with the visions wasn’t bad enough for Noah, the film includes a main antagonist in the form of Tubal Cain (Winstone), the man responsible for killing Noah’s father, who clashes against Noah’s quest.

“Men are going to be punished for what they’ve done to this world. The creator has chosen us to save the innocent.”

Going into this, I was wondering how would Darren Aronofsky tackle the entire story through a big budget film, which includes a “before, during and after” regarding the apocalpytic flood (visually impressive and grim, if I may say so) as well as wonder how he would tackle the building of the ark. The latter involves the Watchers (voiced by Langella, Nolte, Durand and Margolis), stone golems who help accelerate the pacing of an issue [see: building the ark] that could have easily dragged the story longer than it should, but they came across as a visual mash-up  between Transformers and The Lord of the Rings. That was easily the most distracting and worst aspect of the film by far. I will say that the most notable changes Aronofsky does with Noah is presenting the main character with extremist traits, providing the story a villain and giving a voice to women — the latter isn’t something you would notice on the Bible at all.

While Russell Crowe commands the scene very well and makes Noah a complex character to watch due to how he sees his visions and reacts to everything around him in drastic ways, the latter is seen through Noah’s wife Naameh (Connelly) and his daughter-in-law Ila (Watson), who happens to be married to Noah’s son Shem (Booth). While Naameh serves as a voice of reason to Noah, it’s Ila who provides Noah with a headache leading into something that makes their lives a living hell during their stay at the Ark.

While the supporting cast worked well, Winstone’s Cain provided the film’s blockbuster trait, which clashed against Aronofsky’s style — there’s a nod to Requiem for a Dream through the quick cuts illustrating the original sin from Adam and Eve — and makes for quite an unnecessary character presence. I understand that Tubal Cain illustrated the evil aspect of the film, but the evil side was also seen through Noah’s extremist views and Noah could have been better off without Tubal Cain and presented as a character study on the main character. Or maybe not, since the film is also quite artsy (despite its blockbuster appeal) and some folks might need him to stir things up, which Winstone did well.

All in all, Noah is far from Darren Aronofsky’s finest works. But he managed to get great performances from his main cast and tackled something that was tough to adapt into a full length film given the short details provided by the source.