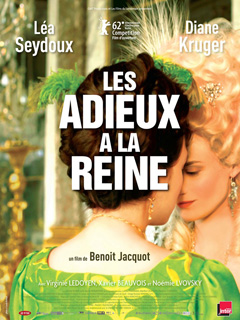 Based on the novel by French historian Chantal Thomas, Les Adieux à la Reine tells the fictionalized relationship that Queen Marie Antoinette (Kruger) had with her reader, a young servant called Agathe-Sidonie Laborde (Seydoux), during the final days before the French Revolution in 1789.

Appointed to pick suitable books and read them to Marie Antoinette, Laborde develops a nearly one-sided relationship with the Queen, who entrusts her with the task of aiding her dearest Gabrielle de Polastron (Ledoyen), the Duchesse de Polignac, whom people suspected was the Queen’s lover.

WHEN DID MARIE ANTOINETTE BECOME BISEXUAL aside, the most compelling thing about watching Farewell, My Queen has got to be Diane Kruger’s interpretation of an often vilified historical figure such as Marie Antoinette. Admit it, it’s so easy to make fun of the Royals — especially easy to mock the ones living at the Château de Versailles [1] — it’s easy to criticize frivolous people with less than serious portrayals of their lives, becoming pop culture fixtures for things people put in their lips. Even Ryan Murphy made a reference to Marie Antoinette’s infamous “Let them eat cake!” on an episode of Popular [1].

Marie Antoinette is at the bottom of the barrel in terms of prestige, but Kruger’s take is unassuming and makes her the most human as it’s ever been possible. She is, of course, Marie Antoinette in essence — choosing how to best carry her jewels with her when she is told to escape, and with a severe case of short-attention span as bad as Dory’s —  but one had never been told to think about what the effect of the French Revolution had from her point of view. I almost felt bad for her, and that’s — to Kruger’s greatest effort — what makes the film compelling. And that’s coming from someone who generally finds Kruger’s performance (except for the one she did in Inglourious Basterds) generally sitting on the weaker elements of a film.

However, none of that means that Léa Seydoux isn’t compelling enough. Her character’s greatest obstacle is having to compete with the the name recognition of the Queen, but she does a capable job even if I never quite understood her obsession with Marie Antoinette. Was she infatuated with her? Did I miss something? Other than them, the rest of the characters — including the beloved Duchesse de Polignac — seemed to be elements included in the narrative because they had to. It’s a recurring issue with historical films (Lincoln had it more than anything last year), but at least in Farewell, My Queen you care about something.

With fitting costuming (the green dress was lush!) and production value, Farewell, My Queen rises above average viewing despite some of the slower parts of the film with a highlight performance from Kruger, who surprises usual detractors.