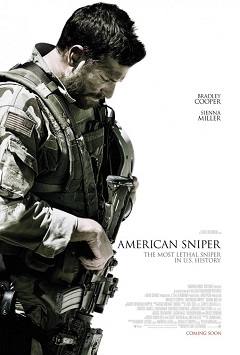 I only have one rule when it comes to awards season since 2012: watch all the Academy Awards Best Picture nominees before the awards ceremony airs. I thought I would only have to force myself to watch The Imitation Game — a guaranteed nominee regardless of my feelings against most of Benedict Cumberbatch’s fanbase, but it turned out to be surprisingly great — but pro-USA-military film American Sniper out of nowhere gets the nom while deserving films (Gone Girl and Nightcrawler) didn’t.

American Sniper follows the life of rodeo cowboy-turned-U.S. Navy SEAL sniper Chris Kyle (Cooper), who is highly regarded in his country as the most lethal sniper ever with at least 160 confirmed kills. Before we get to see Kyle’s first kill, we briefly get to see what his life was before he willingly decided to become a sniper as well as him meeting his eventual wife Taya (Miller) and then being deployed to Iraq shortly after his wedding. Kyle manages to build up a great reputation thanks to his sniping skills, earning the nickname “The Legend” in the process. However, the more time Kyle spends in the war zone, it gets worse for him to adjust to a civilian life when he switches between being at home with his wife and kids and then returning to the war zone… especially when he prefers being there despite his wife’s worries of wanting to have a normal family.

Having read all kinds of reactions in favor and against this film from people who have watched it and haven’t, I asked myself what kind of film is American Sniper about. Is it a pro-war or anti-war film? Is it a conservative-friendly film? Is it a pro-USA film? Is it an exploration of the effects and consequences of war and violence on soldiers? You can make a solid case for all of them, or mix them alltogether considering Kyle’s beliefs and motives for living. Cooper fared quite well as the lead actor within the way the script illustrated Chris Kyle, in particular when Kyle goes between life and war and the alienation gets bigger as time progresses, at one point regretting harder about not being able to save the lives of his fellow solders rather than regretting not being able to spend time with his family, which felt disturbing. Other positives in Sniper‘s favor are the action scenes and the increased tension going hand-in-hand nicely thanks to Eastwood’s direction.

What doesn’t really work for the film has to do with the screenplay. On occasion, Sniper can feel overlong and repetitive due to Kyle’s role, and on occasion corny due to Kyle and Taya’s relationship. However, while the script pretty much left Miller as a suffering trophy wife and her performance wasn’t all that good, Kyle at times gets eclipsed by al-Qaeda sniper Mustafa (Sheik), who seemed even more deadlier and interesting to watch than Kyle despite his brief appearances. I’ll admit I’m not a fan of patriotism from any country — USA patriotism is another thing, though — but I wish we could see the other side of the coin. I knnow that’s highly unlikely to happen — Lone Survivor did it to a lesser extent with the Afghans while Inglourious Basterds fictionally turned the tables on World War II. In Sniper‘s case, we could have seen this from the POV of a suffering military wife who thinks sacrificing your life at the expense of your family is ridiculous… or from Mustafa’s view, whom in one brief scene was shown to be possibly similar to Kyle and matched him in sniping skills.

Currently, I still feel mixed about American Sniper. I didn’t hate the film despite its political context for which it gets criticized (and made fun of) and I’ve seen way worse films from 2014, but it’s definitely not deserving of a Best Picture nomination at all — as far as war films concerns me, The Hurt Locker tops this one, just to cite an example. Even worse, its rabid fanbase loving this for all the wrong reasons makes me feel more second-hand embarrassment than the fake baby. However, would American Sniper still get its nominations if the real Chris Kyle [see: full-on Republican, bragging about his kills and his feud against Jesse Ventura] was actually shown on screen?