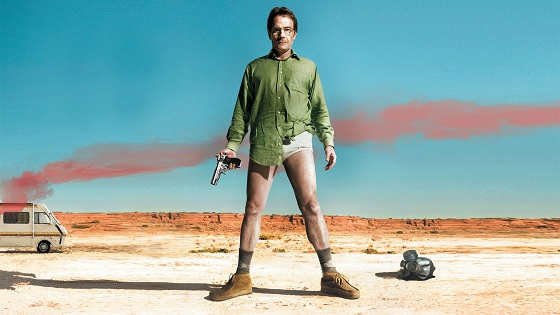 As far as my viewing of Breaking Bad is concerned, I only saw Season 1 and Season 5 in its entirety while watching the rest in bits and pieces. A few days ago, my father convinced me to sit through the entire first season together. It was his first time viewing the show and he enjoyed it a lot, for anyone interested in his opinion. If anyone hasn’t seen this show yet, you’re in for a hell of a ride in regards to Bryan Cranston’s character.

From the beginning of the series, it’s clear that Walter White (Cranston) has been dealt with a pretty shitty hand in life. He’s 50 years old and he teaches Chemistry (and he’s damn good in the area) at a high school, but he also has to work at a local car wash because the school’s paycheck really sucks. Also, his wife Skyler (Gunn) is pregnant and his son Walt Jr. (RJ Mitte) has Cerebral Palsy. All that aside, he leads a pretty mundane life for the most part due to his financial issues and because he mostly hangs around with his family as well as his brother-in-law (and DEA Agent) Hank (Norris) and his wife Marie (Brandt).

Things take a turn for the worst when Walter collapses at the car wash, which leads to the revelation that Walter is diagnosed with Stage IIIA Non-Small Cell Lung Cancer and only has a few years left to live. This triggers him to enter the illegal drug trade scene — by blackmailing his former high school student Jesse Pinkman (Paul) into cooking and selling meth — in order to secure his family financially before he dies.

While Walter does the meth cooking and Jesse works on the meth selling, things go wrong thanks to their ignorance of certain aspects regarding the business as well as dealing with all kinds of problems they have never dealt with before.

While all of this should make us feel sympathy for Walter, the actions he does and the effects of them ends up affecting everyone he encounters, making him a mixed bag of a character and comes across as a son of a bitch despite Walter starting off as a Ned Flanders type of character and ends up fighting for survival with illegal substances just like Nancy Botwin did in Weeds, but with much higher stakes compared to how both characters started. Bryan Cranston’s performance is excellent (and perhaps shocking if you’ve only seen him as Hal in Malcolm in the Middle) and he’s totally engaging to watch when it comes to showcasing emotions as well as his interactions with Jesse, his family and the criminals he deals with early on: Krazy 8 (Maximino Arciniega) and Tuco Salamanca (Raymond Cruz). While the former makes him question his morals between what is right and wrong regarding life, it’s the latter who is very important and pushes him to the creation of Heisenberg.

Compared to the rest of the seasons, Season 1 is the shortest to watch at only 7 episodes. This brings a tiny problem when it comes to the season’s pacing: it’s very fast-paced and very tense when it comes to the drug business scenes, but it’s slow-paced when Breaking Bad deals with how Walter and his family wants to affront the disease — this clashes badly (in a good way) with Walter’s pride, which is also explained through events from his past — as well as showing the lives of Walter’s family. While Walter’s family are interesting to watch when they’re gathered together — one of the season’s best scenes happens with a conversation involving a pillow — it’s a different thing when you watch them individually. Only Hank is interesting to watch on his own because of his profession and him being fed some great sarcastic lines. Although Marie, Skyler and Walt Jr. are hit-and-miss individually, the season finale puts the first two into a problematic situation involving a gift. On the other hand, Aaron Paul’s Jesse is interesting to watch at any moment because Season 1 showcased him very well whenever he’s paired with Cranston, dealing with his junkie buddies or when he reencounters with his family.

All in all, it’s been an outstanding start for Breaking Bad, especially thanks to how Walter is developed throughout the season as well as the screenwriting team pays a lot of attention to several details in the show, making it totally engaging to watch.