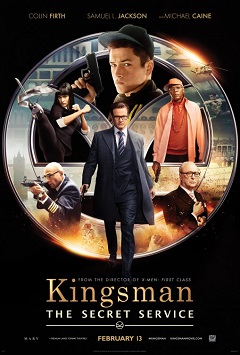 You don’t usually expect to see really enjoyable, important or outstanding films during the first two months year, unless you attend the Sundance Film Festival or something such as The LEGO Movie [read: enjoyable] or American Sniper [read: important, awards-wise] stumbles upon the theaters. Thankfully, Matthew Vaughn’s directorial take on Kingsman: The Secret Service — which got voted as one of YAM’s Most Anticipated Films of 2015 — happens to be pretty damn entertaining to watch.

Despite boasting Colin Firth, Samuel L. Jackson and Michael Caine as the top stars, it’s Taron Egerton who is the lead actor of the film. In Kingsman: The Secret Service, Egerton plays as Gary “Eggsy” Unwin, whose life hasn’t been all that great — a working class young adult living an aimless life and surrounded by an abusive stepfather (Bell) who doesn’t treat his mother (Womack) very well — after his father passed away when he was very young and all he has left from him is a bravery medal with a phone number on the back of the medal in case he ever needed help.

The medal comes into play after Eggsy gets arrested, which leads him to meet Harry “Galahad” Hart (Firth) once again — he gave young Eggsy the medal — and learn about Kingsman, a secret spy organization in which his father used to work for. Upon joining Kingsman, Eggsy trains with Merlin (Strong) in order to become a Kingsman spy while the organization investigates on Internet billionaire Richmond Valentine (Jackson), who is the main suspect behind the disappearances of several head of states and VIPs and has particular plans on his own to “save the world”.

Based on the comic book developed by Dave Gibbons and Mark Millar, Kingsman tips its hat to the Knights of the Roundtable and plays off as a homage to spy films, especially the James Bond franchise when Hart and Valentine remember its past films fondly, or when the high-tech gadgets are displayed. In film style and direction, however, its comic tone and value not only makes it pretty fun to watch, but Kingsman is also quite similar to Matthew Vaughn’s previous directorial efforts such as the first Kick-Ass film and X-Men: First Class through its stylish use of violence — the scene with Harry at the church (which got censored in Latin America, sadly) is a great example of this as well as Valentine’s assistant Gazelle (Boutella), who kills anyone in sight with her bladed prosthetic legs — and the training process to become a Kingsman, respectively. It’s three films in a row that shows Vaughn adapting comic books into movies, but he’s an apt filmmaker. By the way, it’s plain awesome to watch Colin Firth (in a stellar performance) wearing a suit and kicking ass, something you wouldn’t think of after seeing him in The King’s Speech.

While Taron Egerton proved himself more than capable of carrying his story by holding his own against the more establish actors — and he even resembled Colin Firth to a certain extent near the end of the film — it’s the joint effort of the entire cast that makes Kingsman: The Secret Service watchable along with the screenplay from Vaughn and Jane Goldman, which pokes fun at a lot of things beyond the spy genre with humor, violence and grace. However, it also becomes thought-provoking by bringing up some interesting points through Valentine: overpopulation — a global problem that he wants to rid off — and people’s desire for free things, which was a great concept to further Valentine’s plans. Those points might be overshadowed by Jackson’s over-the-top character, but it’s something to think about nonetheless.