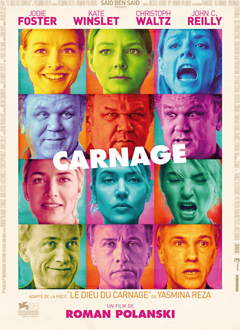 Rarely, if ever, do you have the opportunity to see four immensely talented actors sit in a room together and argue for just over an hour. While this may not sound like your traditional movie, you’ll be pleased to know that Roman Polanski’s Carnage is probably one of the most clever films to come out in years.

The premise of Carnage is simple: two couples meet in an apartment to discuss a quarrel between their sons. Their meeting begins amicably, but it takes no time at all for conflict to start — leaving us with two pairs of parents who are as immature as their children.

Polanski does an excellent job at adapting Yasmina Reza’s stage play Le Dieu du Carnage to the screen. After delivering some devastating films such as The Pianist, Chinatown, and Repulsion over the last few decades, it’s interesting to see him returning to the world of comedy while still keeping the dark edge that makes him original. Filming a small group delivering harsh dialogue back and forth is not an easy task, but Polanski keeps Carnage just as biting and fun as Who’s Afraid of Virginia Woolf.

Although much of the credit of this film’s success can be given to Polanski and the camera techniques he uses to isolate these characters and their loyalties, it would be nothing without Reza’s writing and the stunning performances from the cast. Reza and Polanski collaborated on their adaptation of the play for the screen, creating a script so sharp it could draw blood. The dialogue brings plenty of humor into play, building some immensely unpredictable fights from the most mundane topics.

Jodie Foster and John C. Reilly play couple Penelope and Michael; Christoph Waltz and Kate Winslet play another couple, Alan and Nancy. Together, and trapped in a living room for a large portion of the film, these four actors really bring to light just how vitriolic Reza’s script really is. Each of the actors knows just how to portray an average couple, while also hinting at something hidden within their marriage. When push comes to shove, however, all four of these Oscar-winning or nominated actors knows how to up the ante and bounce their lines to one another without a hint of hesitance.

Reilly has always been best in his underrated drama roles, but it’s great to see him work in a comedy that isn’t along the lines of Step Brothers. Foster shines brightly, delivering just enough emotion to believe this nervous breakdown her character seems to be undergoing without being over-the-top.

Waltz is as pleasant as ever, even after his marvelous role as the Nazi colonel Hans Landa in Inglourious Basterds. His use of facial expressions is so entertaining to watch and his unique chuckle will leave you doing just the same. Winslet is as great as usual, transforming from an uptight woman to one with no control in her life. It should also be known that her projectile vomit deserves its own award this season for being one of the most memorable scenes of the year.

While the film is relatively short in length, spanning under 80 minutes, it packs together just enough laughs to keep you entertained from start to finish. With Carnage, Polanski adds another great film to his filmography that will hopefully be remembered as a high point in the careers of everyone featured.