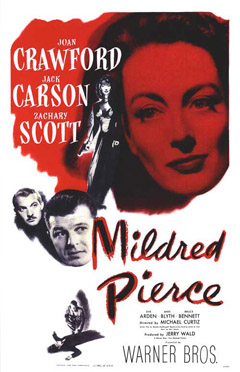 Oh, how I love Joan Crawford.

I know I told Cinema Fanatic to take over the silents and classic film reviews, but I cannot help myself with the few stars that I love.

Mildred Pierce, which has now been re-adapted into HBO’s Mildred Pierce mini-series, starring Kate Winslet in the role that would give Crawford her first Academy Award nomination and win for Best Actress. This first adaptation of the novel by James M. Cain relaunched Crawford’s career in the film noir genre, and also stars Ann Blyth as the petulant little child that everyone loves to hate, Veda.

The first bits of the film include Mildred — a fabulously mink-coated Joan Crawford — fleeing the scene of the crime and possibly considering taking her life, when she’s interrupted by a cop. She later runs into Wally (Carson), who’s always been trying to get together with her, and gets him to return to the house with her.

Of course, she’s trying to pin whatever happened in there on him, but he’s a smart man and knows how to talk his way out of trouble. Finally, the police catch up with us and brings in Mildred for questioning. That’s when we truly begin. Unlike its source material, Curtiz takes a LOT of liberties and changes the film’s more dramatic and straight-forward drama to turn it into a whodunnit situation of sorts, adding a much needed underlying mystery to the shocking melodrama.

Mildred Pierce is such a conflicting pleasure to watch. On one side, you don’t want to deal with the spoiled Veda. On the other, you love it when she’s there to torture Joan’s Mildred — especially considering what came about Crawford’s relationship with her two older adopted kids. Crawford in here is, maybe, at one of her best. She’s engaging, she’s strong, and she’s quite relatable — despite the murder scenario.

Ever since I began watching her films, I have stated that the most glamorous, most beautiful Joan is the one in black and white. The dark contrast, the whites… it made for wonderful angles on her face. Everything in Mildred Pierce seems to have been tailored specifically for Crawford — the lights, the photography, the wardrobe. Crawford-tailored film noir.