As a follow up from yesterday’s news… The Simpson got renewed for a 26th season and nobody is surprised. It is still performing well after all!

Also, Latino Review claims that Aaron Taylor-Johnson is totally going to be Quicksilver, making him Elizabeth Olsen’s character’s brother, in The Avengers: Age of Ultron. There are no official news about either piece of casting news yet!

Anyway, here’s the first clip of Thor: The Dark World. It is very ominous, but surely makes some things clear. Something make Loki have a tantrum on his cell and he ended up like that. Something that makes him, and Thor, want to seek revenge. I guess certain rumors and hints may be true and somebody is getting fridged.

Now, it’s Anthony Mackie’s time to gush about Captain America: The Winter Soldier… I just like it when actors love the movies they are in. Specially if they are geeky movies.

It looks amazing. It’s so much bigger than everyone thought it would be, and we’re kicking a lot of ass. It’s a lot of fun to be a part of, especially with Samuel L. Jackson, who’s been my mentor for so many years.

I also enjoy his bromance with Chris Evans. “We’re like Ebony and Ivory” Aw~ I hope it shows in the big screen!

OMG, James McAvoy wants a ThunderCats live-action movie. He even talks about the fan trailer, and doesn’t like Snarf… That’s so geeky, I love it!

Lion-O is a great character for any actor. It’s a little bit of a cartoon, but you could really go for a 12 year old in the body of a man, who’s a ripped muscly fighting man who’s the king of a people, but who has the intellect of a 12 year old. That’s basically the movie Vice Versa but with superpowers and the Sword of Omens. That could be an Oscar as well as Box Office bait.

There was this rumor that Saoirse Ronan had auditioned for a part in Star Wars Episode VII. Turns out it was true, she did audition, but then again “everyone did”. Whether she gets the part of not, she sure had fun in the audition so kudos to her!

Nobody has a clue what it’s about, and nobody’s read the script. So I’ve gone in and read for it, but I have to say, I think it’s the only time I’ve ever thought, ‘You know what? Even if I don’t get it, I had so much fun auditioning, pretending to take out a lightsaber – out of a bag, kind of inspect it and not know what it is. That was… that was great. A lightsaber! Star Wars!

Jack Bauer is back! Yep, we got a bit more 24 in a miniseries followup called 24: Live Another Day. It will be 12 episode and will take place over 12 hours. It will take place four years later in the franchise, with Kiefer Sutherland returning as Bauer who is on the fly in London.

Finally, it’s zombie time! First, Romero has a zombie comic series with Marvel that will be shown at the NYCC. It’s called  Empire of the Dead and there’s a first look at the cover of the first issue, drawn by Alex Maleev. On the other hand, we have Afterlife with Archie, the first Archie Comics title that is not for all ages. Yup, we get zombie Arch-pocalypse in Riverdale, starting next Wednesday! 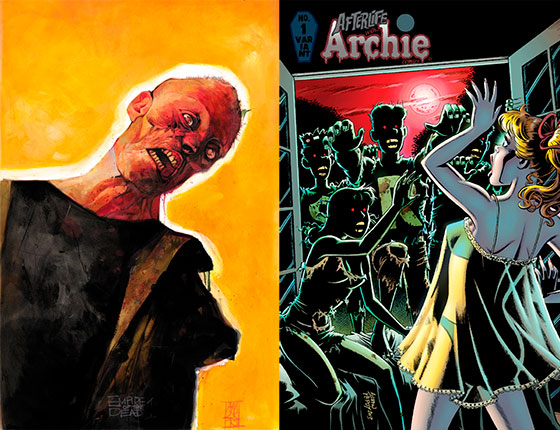 And that it’s for the week. Before I go, Empire launched its list of 100 sexiest movie stars. Damn, the fangirls have been working over time! Benedict Cumberbatch and Tom Hiddleston got 1st and 2nd place respectively on the Men List. But there’s also Avengers, mutants, wizards, elves, dwarves, a hobbit, a cannibal, James Bond and Superman. On the women’s side, winner is Emma Watson with Scarlett Johansson as the runner up. And the Women List also have classical actresses which the other list lacks.