Truly, the tales and songs fall utterly short of your enormity, O Smaug the Stupendous!

Here’s what I was waiting for! The Hobbit: The Desolation of Smaug trailer breakdown!

OMG! The Chronicles of Narnia franchise may be back! The Mark Gordon Company and The C.S. Lewis Company are trying to make The Silver Chair happen! Aw, I wish them the best. I really do.

Natalie Dormer talks about Game of Thrones, Margaery’s potential as a good therapist, and the twist of genius that was her part on Elementary:

Moriarty has been done so many different ways, but it really is a twist of genius to make [Sherlock and Moriarty] ex-lovers and soul mates. The psychology—the closest you can get to another human being is being in love with them. And then to turn that on its head, that is so exciting. And who knows that the future holds for Moriarty [on the show]. I don’t think she has completely disappeared.

Hayley Atwell has read about the possibility of an Agent Carter TV spinoff and she definitely down with that!

I read about that too. The one-shot was so successful, the fanbase were like, ‘We want more of Peggy!’. I think Marvel probably take that very seriously, and it’s certainly something I would be a part of doing. I’d be interested to show different sides of Peggy.

Here are the new character posters of Thor: The Dark World. Poor Hogun though! Why only Volstagg and Fandral? Also, a new featurette about the pretty locations~ 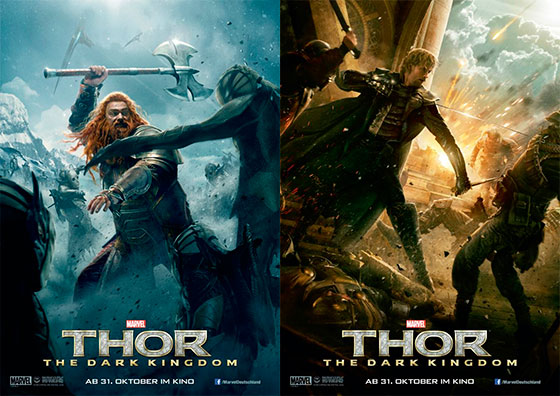 It’s interesting because a lot of people equate it to Batman and Robin, but the reality of it is, it’s more of a working relationship, a respect relationship as opposed to a leader and follower. The three of us (Captain America, Falcon, and Black Widow) work really well together and we support each other.

Samuel L. Jackson spills the beans and says Elizabeth Olsen is part of The Avengers: Age of Ultron. He claims he doesn’t know what she is doing but Olsen was in talks to play Scarlet Witch, so I guess now that’s a done deal~

Cheesiness and bad historic references aside, the public has loved Sleepy Hollow just fine. The debut was so good that Fox has already renewed it for a second season. Congrats, considering how easily Fox cancels shows~

Here’s Guillermo del Toro’s opening for The Simpson‘s Treehouse of Horror XXIV. Can you find all the references to his and other horror movies?