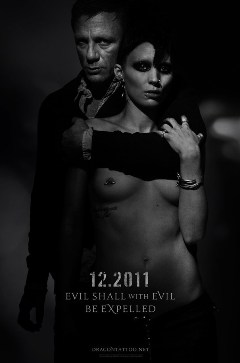 First of all, I haven’t seen the Swedish film adaptation of The Girl with the Dragon Tattoo. Haven’t read the book either. But I can tell you that David Fincher’s version of the first part of the Millennium series was very interesting to watch.

The Girl with the Dragon Tattoo follows Mikael Blomkvist (Craig), a journalist who just lost a libel case against businessman Hans-Erik Wennerström (Friberg). Blomkvist ends up having his reputation damaged and owing a huge sum of money to Wennerström’s company. Despite his recent problem, Henrik Vagner (Plummer) hires Mikael to investigate the 40-year-old disappearance of his niece.

Mikael begins to work on the task by investigating Henrik’s family (Skarsgård, James & Richardson). But once he can’t do more on his own, he joins forces with computer hacker Lisbeth Salander (Mara).

Fincher’s version of The Girl with the Dragon is pretty much a dark, brutal and intriguing film to watch thanks to the ingredients it showcases, such as its stylish design that nicely joins the storytelling – delicately crafted through the eyes of Mikael and Lisbeth as they handle the investigation – and keeps the viewer hooked. The nature of the film’s characters — well executed by solid performances from the cast — is dark yet appealing. The film is further enhanced by Trent Reznor and Atticus Ross’s score, which haunts the film, providing a chilling aspect.

However, it’s Rooney Mara who stands out the most in Dragon Tattoo and gives everyone their money’s worth. Look at that poster! Even without watching the film you already know that Lisbeth Salander is by far the most interesting character of Dragon Tattoo. Mara fully submerges herself with style and spark into the role of a no-bullshit punk-goth computer-hacking woman with a past so violent you can smell it from miles away. Every second of Mara gracing the screen is a delight to watch.

The only problem with Fincher’s adaptation of Larsson’s novel is the film’s pacing, in particular the final minutes of the film and a few scenes involving Mikael. Don’t get me wrong, Daniel Craig’s performance as Mikael was good. But Mikael becomes more interesting to watch only when he is paired with Lisbeth and/or interacting with a cat, the latter providing some comic relief to the film. The final minutes of the film starts to lose some steam after the case is solved, rendering the rest of the scenes a bit hard and even unnecessary to watch. And while the film clocks in at 158 minutes, I ended up feeling that it was 30 minutes too long.

Overall, The Girl with the Dragon Tattoo isn’t the best film David Fincher has done. However, his film adaptation of the Swedish novel is a stylish thriller worth the watch thanks to Rooney Mara’s Academy Award-nominated performance.