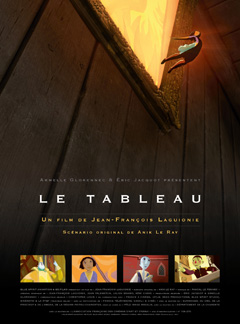 In the ocean that is commercial CG animation perfected by big studios like Pixar, Dreamworks or Sony — and okay… Disney, who have inundated our screens season after season with animated films that have started to feel a bit the same, it’s refreshing to be able to see work like Jean-François Laguionie’s imaginative Le Tableau [1].

Shaped after the styles of Picasso and Matisse, Le Tableau (or The Painting) tells the story of the characters of an unfinished painting, who have divided themselves in three different stages: the Toupins (the totally painted) at the top of the painted realm, the Pafinis (the not finished) — translated to Halfies in the English subtitles, and the Reufs (the sketches). Social classes aside, the film follows a Pafini named Lola (Monceau) who had never fallen in love, unlike her friend Claire (Berthier) who is madly in love with a Toupin called Ramo (Larmande) — a relationship frowned upon both by the Toupins and the Pafinis.

One day, as Lola, Ramo and a Reuf named Plume (Jahn) are being chased down by a group of Toupins at the orders of Le Grand Chandelier (Roehrich), they end up on the journey of looking for The Painter to finish his work.

Not since Pixar made me believe toys could move on their own when I’m not looking (1995) or that there are magical closets that lead you straight to Monsters, Inc. (2001) have I felt the sense of wonderment that made animated films so much fun growing up. And though it seems like it hasn’t been that long, considering the number of animated films worldwide has multiplied tenfold, it feels like it’s been fifty years.

Within a mix of 2D animation, CGI rendered in 2D and live action, Le Tableau creates a plausible world where paintings come alive — very much a la Harry Potter! — in search of love… and even, maybe, in search of their creator. Within all the heavy social discussions literally represented by a fat Toupin who intends to keep the status quo mocking the status-transcending love of Ramo and Claire, there’s a heavy emphasis on the omnipresent Painter, who has apparently forsaken the Pafinis and the Reufs. But has he?

Another nice touch in the development of Le Tableau is that writer director Laguionie decided to use actors who had specialized on French dubbing — lead voice actress Jessica Monceau, for example, has dubbed Rooney Mara on A Nightmare on Elm Street, The Social Network, and The Girl with the Dragon Tattoo, as well as Ellen Page in a number of her films, among other projects. So, even if the cast voices may be recognizable for French audiences used to watching dubs, international audiences aren’t distracted by it and enjoy all the pluses of professional voice actors… something that Hollywood has entirely ditched, it seems, in favor of celebrity voices.

In the coming Academy Awards nominations, Le Tableau should be there amongst this year’s best animated releases.

You can actually buy Le Tableau and brush up on your French with the Bluray release on Amazon France. Sorry, no English subs available for it.