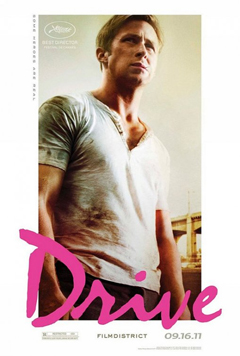 I’ll start by simply stating that Drive is one of my favorite films in a long time. It is stylish, sexy, subtle, and surprising — and it packs quite a punch. It’s a brilliant piece of cinema, full of tension, love, blood, and driving. Attempting to classify Drive is near impossible for me. It draws from plenty of genres — noir, action, thriller, romance, drama, crime — and left me in almost a dream-like state of bliss. Take this as your sign to yield — and either continue reading or shift into reverse.

Drive tells the story of Driver (Gosling): a Hollywood stunt driver who moonlights as a getaway driver for some extra cash. Driver is a lonely man, one whose only love in life seems to be driving. It isn’t until he meets his neighbor Irene (Mulligan) and her son that his life changes drastically. When her life is put in danger due to her husband Standard’s (Isaac) mistakes, Driver offers his help in a simple robbery. When the job takes a turn for the worse, he decides it’s his job to do whatever it takes to keep Irene and her son safe.

Nicolas Winding Refn won Best Director at the Cannes Film Festival for this film, and it is no surprise why. There isn’t an aspect of this film that doesn’t contribute to its overwhelming nature. Every frame seems carefully chosen and full of such a simple beauty that reminds us of the relaxation of a night drive. Each moment of hyper violence is just as remarkable as the last — perfectly fitting and not at all gratuitous. Even in its calmest moments, the score by Cliff Martinez serves to seduce us with false safety, knowing that at any corner someone may be waiting and watching.

As anyone who has seen Blue Valentine or Half Nelson would know, Ryan Gosling is a marvelous actor. The way he commands the camera in each scene as the unconventional hero is absolutely stunning. Although his character barely speaks, his presence and expressions are all that is needed to progress and develop his character. Every action seems rightfully in place, and Gosling gives a certain realism to this driver we don’t know much about. Much praise should be also given to Carey Mulligan, who holds her own next to Gosling and shares a chemistry with him that is rare to find between two characters. Just a simple glance between the two is enough to make your heart flutter with joy and worry at the events that might unfold.

It terms of the supporting cast, Hendricks, Perlman, and Isaac play their parts damn well, showcasing their ability to jump from tough to vulnerable — something that is necessary to their characters and the film. However, it’s Cranston and Brooks who stand out the most. Bryan Cranston brings a great balance of comedy and drama to his character — a man who we care about not only because he’s important to Driver, but because he’s a good-hearted man with bad luck. Albert Brooks deals nothing but pure stress with his menacing character, becoming the greatest threat presented in the film.

The magical way that Drive intertwines gorgeous visual storytelling, dazzling performances, and a grand soundtrack is impressive. Watching the film is just as exhilarating as taking your own night drive, shifting from slow and relaxed to fast and heavy within seconds. It is with the unconventional and unique film Drive that Nicholas Winding Refn presents his truly beautiful masterpiece.