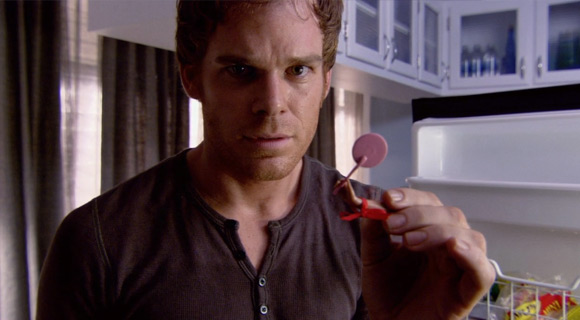 It’s been Thanksgiving deals on the internet, so… I got myself some seasons of Dexter on old school DVD to re-watch in the now-dusty free-region player. It’s been nearly 7 years since I saw the first season, so it was interesting to re-watch it with the knowledge of what happened throughout its 8 years on the air. One thing is certain- Boy, did I miss Agent Doakes!

For those of you who might have missed catching the show in any of its seasons, Dexter follows Miami Police blood spatter analyst Dexter Morgan (Michael C. Hall), who happens to be a serial killer. The first season of the show, which is arguably the best, follows closely the novel Darkly Dreaming Dexter by Jeff Lindsay and works as an origin story as we follow him through a journey of self-discovery that will put him face to face with the Bad Guy of the season: The Ice Truck Killer, a sick motherfucker (as Doakes would say) that drains the blood of his victims (usually hookers) and chops their limbs off.

We also meet Dexter’s stepsister, Debra (aka. Deb, played by Jennifer Carpenter), who after the death of their father Harry (James Remar), is the only humanizing link for Dexter who had always put on a mask when dealing with people, which includes his conveniently-damaged girlfriend Rita (Julie Benz), and the Miami Police co-workers; opportunistic Lieutenant Maria LaGuerta (Lauren Velez), temperamental James Doakes (Erik King), good-hearted Angel Batista (David Zayas) and sexually-harassing dork Vince Masuka (C.S. Lee).

A couple of things to note; the first season isn’t as poetically awe-inspiring as I remember it being without the actual shock-factor, but still makes for a solid season with some inspiring writing and a couple of lines that -maybe coincidentally- foreshadow some events next season and the next to last. And this is probably due to bad writing, but I had forgotten Angel had a daughter for whom he supposedly lived for (and is subsequently forgotten), and that LaGuerta had once had the hots for Dexter, and they once both spoke a lot of Spanish. I was also reminded that there was a time when I supported LaGuerta against Captain Matthews (Geoff Pierson). Oh, how the times change.

Though there’s a certain excitement in the justified kills in the series, which will get more monologue-y and ritualistic later on; what still attracts me to it is the sibling relationship between Dexter and Deb (and how it eventually changes), as well as their subsequent talks on how strong a bond they share despite not being actually blood-related juxtaposed with all the blood Dexter deals with and his own backstory. In a sense, I was now able to see Carpenter’s character as almost equal to Hall’s, and got to appreciate her even more than I did on first run. Deb has certainly some serious daddy issues that are the catalyst to EVERY single bad thing that happens in her life, and I just feel really protective of her because we all can see that she’s only yearning for her big bro… who, to quote Hermione, has the emotional range of a teaspoon.

The only fault with the show, really, is that it requires religious watching like all cable shows. You can’t just pick it up from any episode in any season (risking spoilers), it’s something that you gotta watch from the start. And while I thought one or two episodes were a bit slow (maybe even as filler or focusing on the other characters; 1.05 Love American Style or 1.08 Shrink Wrap), the first season still seems like the best. If it doesn’t grab you by the last three episodes Seeing Red, Truth Be Told and finale Born Free, then Dexter might not be the show for you.

The show is also a LOT less explicit than I remember it being. LOL Or maybe television has gotten so raunchy in the last couple of years that the first season looks sorta tame.