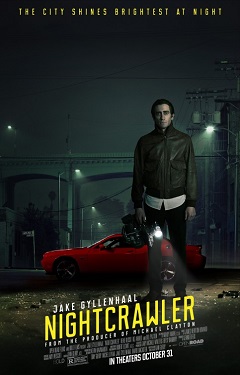 Nightcrawler follows Lou Bloom (Gyllenhall), a thief who hasn’t had formal education and lacks work experience, but that doesn’t stop him from trying to climb the ladder of success in Los Angeles no matter what. At first, he applies for a job at a scrap yard, but the manager turns him down since he won’t hire thieves. However, a light bulb inside his head turns on when he witnesses a freelance film crew shooting the aftermath of a car crash, inspiring Lou to become a freelance video producer. His activities consists mostly in listening to a police scanner, identifying accident and crime scenes, rushing to them, filming them and then trying to sell the footage to local news programs for breaking news and early morning bulletins.

“Think of our broadcast as a woman running down the street with her throat cut.”

Violence sells, but that’s no novelty when you watch (or read) the news and Nightcrawler is fully aware of it. As Lou starts to get deeper into his new job — including purchasing work material and hiring Rick (Ahmed) as his assisstant — it’s his self-learning tactics and the advice of Nina (Russo), a local news director who becomes Lou’s first client, that drives him into obtaining better footage.

While Dan Gilroy’s directorial debut shares some similarities with Fincher’s Gone Girl in terms of how the media operates and what they choose to show for comsumption as well as Lou sharing some similarites with Amy Dunne in the ways they operate their own schemes — you can even say both films compliment each other — Nightcrawler differs by addressing unemployment (Lou and Rick have suffered a lot from this) and showing how far one would go to create shock and fear in the media as well as showing a lack of regard for ethics/morals through Lou’s job, which is visually invasive and legally questionable, as well as Nina’s workplace lusting for ratings and being hungry for sensational headlines, no matter the lack of ethics and morals of the source material.

Visually speaking, Gilroy paints a disturbing yet intriguing film to watch, elevating it beyond crime porn and it is strongly enhanced by its authentic gritty feel and the cast’s acting, especially Jake Gyllenhaal. He looks outstanding here and doesn’t let you take your eyes off the screen despite his sociopathic character being pretty despicable and creepy-looking (resembling American Psycho‘s Patrick Bateman a little bit), who gets bolder and wreckless in his pursuits of stories. Gyllenhaal is also provided with strong supporting acts from Rene Russo’s Nina, who has great chemistry with Gyllenhaal and matches Lou’s intensity to a certain extent (especially in the dinner scene), and Riz Ahmed’s Rick, who serves as Lou’s (and the film’s) moral compass while also using his work as a way to escape unemployment despite what it really means to hang around with Lou later on.

The screenplay keeps the pacing steady and builds up to a big final act that differs from the tone established in the first 2/3 of the film and includes a twist, but it effectively feeds off from the previous moments. Despite the film’s subject not being a novelty to some (gore and shock value included), the story presented in Nightcrawler and its cast makes it one of 2014’s best films.