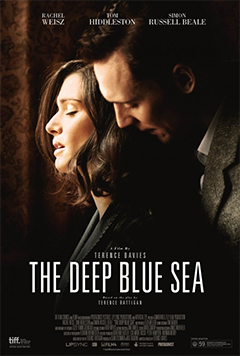 From its opening scenes, one can already feel the dread layered into Terence Davies’ latest film. A ticking clock, a dimly lit room, a tragic piece of music, and the haunted face of Rachel Weisz are what is presented – and it is only a preview of the devastation that is to come.

Adapted from Terence Rattigan’s famous play of the same name, The Deep Blue Sea is a beautifully heart-wrenching tale of the effects of unrequited love. Hester Collyer is the emotionally stranded lover of a drunken former World War II pilot, as well as the former wife of a high-class judge. In a desperate attempt to win her lover back and send her ex-husband a message, she attempts to commit suicide and fails, leading her further away from the men in her life and deeper into the depression she seeks to escape.

Time and time again, women have taken the risk of stepping into Hester Collyer’s shoes to deliver a performance they deem is worthy for this character. The vulnerability and intimacy that that Rachel Weisz brings to this role is one rarely seen on screen. She remains emotionally distant and gets lost in the moments of passion she shares with Tom Hiddleston – the man who plays her lover Freddie Page. Hiddleston stands out amongst the supporting cast, and his role offers him a range that few small roles can explore – moving from his fits of rage to being a sympathetic lover.

The film might seem like the simplest of tales, but the acting and Terence Davies’ camerawork really brings this to another level. Davies takes advantage of Rachel Weisz’s beauty with every second of film, focusing on a character trapped in her life so much so that the audience sometimes begins to feel just as trapped. As much as slow-paced cinema might appeal to some, the tedious pacing in this is a bit of a flaw that isn’t without its positives. One scene in particular, in which the camera slowly moves in on Weisz and Hiddleston dancing slowly to Jo Stafford’s You Belong To Me, fills the air with warmth, romance, and sexual tension in a way that hasn’t been seen since David Lean’s classic romance Brief Encounter.

Many moments of silence in the gloomy but intoxicating settings, involving only some light additional music, are those that stand out as the most beautiful of the film. The dialogue, heavily adapted from Terence Rattigan’s play for the film, bounces between clunky and refreshing. A few lengthy discussions in the film seem to have barely any meaning, while others tend to pack the punch that one needs to be drawn back into this tale of despair.

Terence Davies’ The Deep Blue Sea truly proves to beautiful study of unrequited love, but it is not one without flaws. Aside from being stilted at times, it is worth watching if only to experience a masterful performance from Rachel Weisz.