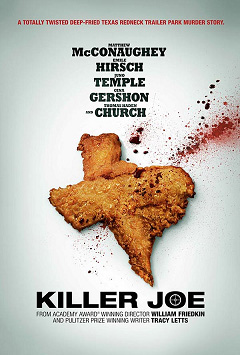 Following the claustrophobic horror-drama Bug, director William Friedkin strikes again with Killer Joe, an intense and incredibly engaging thriller like no other.

With an enormous debt looming over his head, the very desperate Chris (Hirsch) turns to his father (Church) and step-mother (Gershon) for help with a plan for quick money. By hiring Joe Cooper (McConaughey), a detective who moonlights as an assassin, to kill his mother, they can collect enough insurance money to pay everyone off and live peacefully. When Chris and his father can’t come up with the money, Joe sets his eyes on a retainer, Chris’ younger sister Dottie (Temple), to get the job done.

Marking the second time that Friedkin collaborates with playwright Tracy Letts – the first being Bug – it’s clear that this is a partnership made in heaven, or probably hell. Letts is absolutely brutal with his characters, and while we should feel absolutely disgusted with some of the things he makes them do, we can’t help wanting more of what’s happening on screen. Allowing Letts to adapt his own play for screen was a genius idea, as it would likely be impossible for anyone else to handle the harsh material within.

Technically a thriller with noir influences, Killer Joe has more black comedy stuffed into its dark script than one might think. Friedkin takes full advantage of just how perverse and unrestrained Letts work is, and brings out the best in it. Trashy redneck reality series Honey Boo Boo might draw in audiences everywhere, but this is an entirely different breed of white trash that’s a thousand times more fascinating and a hell of a lot wilder.

Stylistically speaking, Killer Joe is a big step up from Bug, even though they both have the same gritty nature and probably takes place in a similar location. Caleb Deschanel’s photography is stunning and it’s a wonder how he can make such disturbing scenes, like a certain climax involving fried chicken, look so damn good.

The ensemble work in Killer Joe is spectacular, as every single cast member brings their A-game to the table. Thomas Haden Church’s deadpan humor steals the scene more often than not, and both Juno Temple and Gina Gershon deliver some brave work. At the end of the day though, it’s Matthew McConaughey who impresses the most here. Those who know McConaughey’s romantic comedy image will have their visions of him completely shattered here, as he works this cold, sleazy, dangerous role pitch perfectly. Had this not been slapped with an NC-17 rating, there’s a good chance this film would be up for quite a few acting awards considering how brave the performances were.

There’s a good chance walking up to the screen and running your finger across Killer Joe would leave you drenched in grime, bourbon, and shame, but that’s all part of the charm of this twisted and uncomfortably hilarious film.