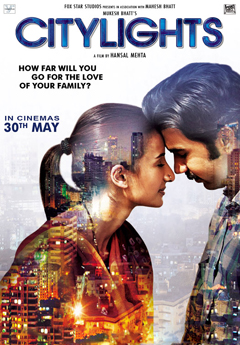 Coming off a certain height from watching Rajkummar Rao in Kai Po Che! and, to a certain extent, Shahid, I was looking forward to CityLights until I saw the trailer and realized it was a remake of the critically successful –thrilling, yet spirit downer– English-Philippines co-production of Metro Manila. It’s funny that Indian filmmakers, especially coming from a Mukesh Bhatt production, are so paranoid of being called a rip-off now that they made sure that Sean Ellis was credited multiple times during the opening and ending credits. Without counting, it probably showed up about a dozen times. In case you weren’t sure.

Though people defend remakes saying that a new interpretation is always welcomed (I still do not believe Fincher’s version of Dragon Tattoo, though glossy, was necessary), I was questioning the decision to bring this story to the screen, so close to the previous version, despite the cultural and setting change. If the drama in Metro Manila got on your nerves, let me tell you- in this Indian version, everything that can go wrong goes worse with ten times the drama and none of the thrills.

CityLights tells the story of Deepak (Rao), an ex-army man from Rajasthani trying to make a living with his small clothing store. Unable to make his payments on time, he with his wife Rakhee (Patralekha) and their child move to Mumbai in search for a better future, only to be kicked around by the challenges of a big city.

While the film manages to work as a stand alone piece with decent photography, music, and more than competent acting, the script really tried to milk as much of the melodrama that it could. It wasn’t enough that this family was starving to death, we need to question Rakhee’s taking up dancing at the bar. Not only through her, but also through her husband’s jealousy and his co-workers… including Vishnu (Kaul) who uses it as a tipping point with Deepak. He’s shamed into stealing because his wife might-or-not be selling her body. Let me get this, he is a good father for stealing for his family, while her honor is saved because her body is only his, RIGHT? Excuse me as I wallow watching Chandni Bar once again.

That’s only one detail that I wasn’t game for, then there’s the kicking while you are down that Deepak’s boss does to make him even more of a victim for the last act, and the total setup for the whole heist that seems a lot more planned out on Deepak’s behalf, than how it was laid out in Manila. I know action sequences aren’t Indian filmmakers’ forte, but this just needed some more punch at the end.

Even though it wasn’t a technically faulty remake, the dramatic aspect could have been a lot better handled without going to extremes of how horrible people can be and how much of poor victims this family was like in the more balance Siddharth.