Orange Is the New Black – Season 2 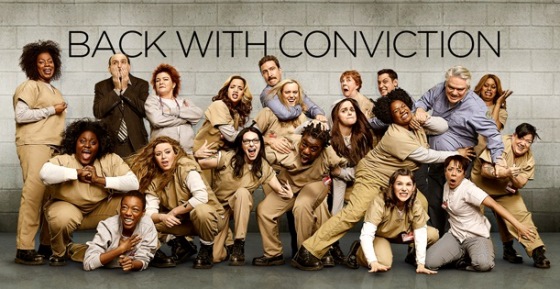 The anticipation for Season 2 of Orange Is the New Black had to be as astronomically high (higher in my case) as it was for Game of Thrones‘ Season 4. After its excellent first season which was worth the multiple replay views, it’s by far the best of Netflix’s content for binge-watching purposes.. and it still remains as such.

The Season 2 premiere revolves entirely aound Piper Chapman (Schilling), dealing with the consequences of her past with Alex (Prepon). The way the first episode played out was great, yet uneven, since Piper alone isn’t the show’s main source of strength despite Schilling showcasing her talents in superb fashion — Thirsty Bird could easily be her Emmy submission episode next year, and she’s great in it. While I feared for a brief moment that this season would have a drastic scenario change, the following episodes thankfully take us back to Litchfield where major changes are seen.

At the beginning, Piper’s storyline played out as the main storyline in contrast to the rest of the inmates, who happened to be more interesting to watch than her. This time around, Piper is scaled down a bit, and while her storyline remains isolated from the rest of the inmates because her own drama is her own, it still remains important to watch. However, we get to develop the rest of the characters, exploring the polarized factions between white, black and latino inmates, as well as showcasing the prison staff more often, in particular with Caputo (Nick Sandow) and Figueroa (Alysia Reiner) going against each other. This time, Litchfield’s center of attention revolves around the show’s first full-fledged main antagonist: Yvonne “Vee” Parker (Toussaint), who returns to prison for the second time as we get to explore her history with Red (Mulgrew) and Taystee (Danielle Brooks).

It was lovely to revisit the characters once again and it was really great to see new flashbacks. Taystee’s past is highly important triggering the events to take place, but the ones that stood out stronger were the ones involving Morello (Yael Stone), Suzanne (Uzo Aduba) and Poussey (Samira Wiley). While Suzanne’s past is tied to the final scene from last season in shocking fashion, and Poussey’s past is very moving and explains her feelings towards one of her best friends, who would have thought that cutesy (albeit racist) wedding-hopeful Morello turned out to have a very fucked up past? The way the flashbacks are displayed are excellent since they also tie into the current behavior of our characters. 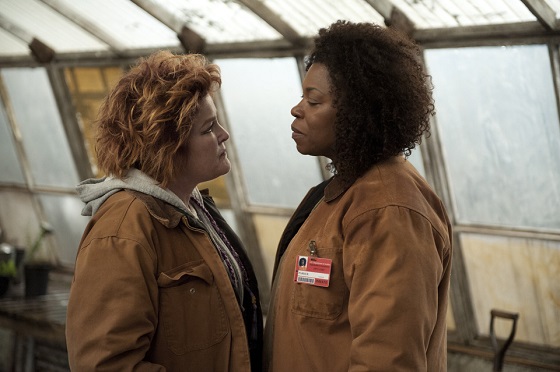 This season deals mostly with the themes of power and selfishness, as seen through almost every character, but nobody stood out stronger than Vee in that regard. Toussant was amazing and captivating to watch as Vee’s ruthlessness and manipulative/sociopathic ways literally escalated into a full-blown war with Red, who was still dealing with the loss of her kitchen position — a powerful position in the prison now run by Gloria (Selenis Leyva), as well as messing with other characters who end up suffering the consequences of screwing with her. Also, kudos to Kate Mulgrew, who held her own against Toussaint and carried effortlessly the big prison story.

The rest of the characters? Larry (Biggs) gets to deal with the fallout of his break-up with Piper and goes into a different path, which should have bigger consequences for him and Piper next season. On the other hand, Pennsatucky (Taryn Manning) is powerless following last season’s events — losing her religious posse and right-hand partner Leanne (Emma Myles), who develops her own actions — and somehow bonds nicely with Healy (Michael J. Harney), who deals with both anger issues and trying to make a nicer place out of Litchfield. While Caputo does his best to rise above Figueroa, we also get to see her in a different light and that explains some of the budget problems. There’s more I could talk about, but there’s so much greatness to witness in the show that you should see it by yourself. In terms of things I never expected to see, making Pennsatucky likable was one of them alongside some of the other backstories.

If there’s things that Orange should be criticized for this season, it would be for shifting to check on Larry’s life as well as the lack of Sophia (Cox), Pornstache (Pablo Schreiber) and Alex, as well as introducing Asian inmate Brook Soso (Kimiko Glenn), who wasn’t that funny or interesting to watch. Maybe she’ll get redeemed next since she has yet to get her backstory, along with other inmates, including Yoga Jones (Constance Shullman). In Alex’s case, Laura Prepon was a guest star this season, and the show cleverly wrote her out for the most part until the end when things started to not look pretty for her. While the only thing of notice for Sophia was having her son visiting her in prison for the first time, she could have been used a lot more often via Red in her war against Vee. On the other hand, Pornstache was quickly dispatched shortly after returning. I guess they couldn’t have him and Vee being antagonists in the same space, but he was easily the most interesting prison staff member in the show (until Caputo vs Figueroa takes off) and his presence adds big energy to the series, he deserved better.

All in all, Orange Is the New Black remains outstanding to watch in storytelling, characters getting expanded, comedy value and powerful backstories. Looking forward to Season 3, even if the wait will feel like forever.