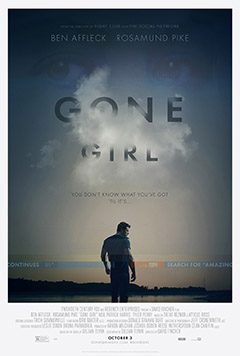 Yeah, count me out from the people that salivated over Fincher’s Dragon Tattoo — which was re-gifting with a fancier packaging — or The Social Network. However, I’m never oblivious to buzz, and Gone Girl has generated quite a bit… not only the expected for him, but also considerable talks for Rosamund Pike whom I may have a certain weakness for [1]. Except for the ubiquitous still of Affleck with Pike’s face on a missing poster, I had largely avoided anything to do with the movie, so I went in as fresh as someone who just wanted to watch a new Fincher movie.

Considering the state of gender discussion and domestic violence in the US, Gone Girl couldn’t have made it to theaters at a most interesting time, telling the story of Amy (Pike) and Nick (Affleck), a married couple with financial (and work) problems going through the roughest patch in their lives together. Nick wakes up in his Missourian suburban morning fantasizing about killing his wife, until the day of their anniversary when he finds her missing.

Viewed as the prime suspect in his wife’s disappearance, Nick will have to trust his twin sister Margo (Coon) and leave it all up to Detective Boney (Dickens), as the whole nation judges him.

In here, Fincher does what he does best with the people that accompanied him in both his movies I didn’t quite like, though I’ve never taken them down a peg or two for their technical aspect. Taking into account that his films have a sizable budget, it’s not hard to see why Gone Girl looks the way it does, even if it doesn’t look as polished or sophisticated as Tattoo (I did have some trouble with scenes in the dark), but in here the script takes more of a center stage… at least in the second half, which is taken over by a marvelously chilling Pike, as well as Carrie Coon and Kim Dickens, who become a trinity to carry Affleck’s so-so character.

I did have a problem with the pacing of the film, considering it’s a 2.30hrs movie, but feels well over three hours long (divided into two or three different movies), which is a problem I found during my short House of Cards stay as well. However, performances hold the movie together, alongside intended-laughable moments, even with *legasp* Tyler Perry one-liners, and- oh, who am I kidding? Missi Pyle was hilarious too. More than a gender tug-of-war, I sensed a suburban mentality versus the big city battling it out in this messed-up power couple, which was highly entertaining. Similar to Maps to the Stars, but with four times the production value.

Overall, I’d like to see this getting nominations in film/sound editing, as well as a lead nod for Pike, and maybe supporting for Coon (or Dickens). But if you’re rooting for Pike just to piss Reese Witherspoon off, Gone Girl winning BP will probably put Reese on stage.

Sidenote: Rosamund Pike saying the c-word so many times in a rage-infused monologue and Affleck going down on her (as brief as that was) didn’t warrant a NC-17 MPAA open war. Color me surprised.

Some people have said that the film is quite graphic, which is not. Or maybe I’ve been just watching too many Korean films.