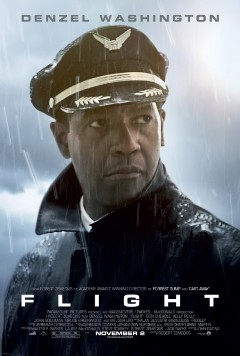 Robert Zemeckis’s Flight lives up to its title right from the start as an airplane flight goes wrong thanks to a technical malfunction. Just before the planes crashes to the ground, captain Whip Whitaker (Washington) rolls the plane upside down and manages to crashland the plane, saving 96 out of 102 people onboard.

“The FAA [Federal Aviation Administration] placed 10 pilots in simulators and recreated the events. Every pilot killed everybody on board. You were the only one who could do it.”

At this point, Flight changes from its airplane flight premise  into a character study film on addiction through Whip, who happens to live his life usually drunk and/or high while still functioning very well for the most part when it comes to his daily life activities. The fact that he saved a lot of lives is remarkable and should make him a national hero because the way he crashlanded the plane is virtually impossible to replicate successfully. However, investigations regarding the airplane crash could easily put him behind bars for a long amount of time.

Should we judge Whip because of his addictions or should we praise him because he saved a lot of lives?

Not many films showcase functioning alcoholics very often, but Denzel Washington yields an impressive performance in Flight as he digs deep into Whip’s problems, which go beyond alcoholism — he conveys the power of the bottle with ease  as well as how nasty alcoholism can be — and the potential jail sentence. He has a very strained relationship with his ex-wife and son, but he also bonds with Nicole (Reilly), a recovering heroin addict that tries her best to help Whip understand and accept his addiction. But like it happens with most addictions, Whip quickly relapses.

The film isn’t free of flaws. Despite the spectacular airplane scene, which was masterfully executed and horrifying to watch despite the lack of bloodshed, the film loses some steam when the subplot involving Nicole and Whip takes place. And given its premise and a script that is serviceable at best, Flight feels 30-45 minutes too long to justify it running for 140 minutes. However, Flight rises above its flaws thanks to its cast. Don Cheadle is pretty good as the lawyer who does everything he can along with the union representative (Greenwood) to save Whip’s ass from going to jail, despite the pilot bringing complications towards his work. John Goodman is funny and entertaining as Whip’s dealer. Melissa Leo works well as the prosecutor who is determined to make someone accountable for the six lives lost. Bruce Greenwood and Kelly Reilly work fine with their roles.

All in all, Flight serves as a great return to live-action filmmaking for Robert Zemeckis, who has spent the last ten years of his life working on animated films, and it is recommendable thanks to Denzel Washington’s portrayal of a functioning alcoholic and the supporting cast. However, I wouldn’t suggest to watch this just days before a scheduled airplane flight. Nor would I expect Flight to make it to the in-flight entertainment services of airplane companies at any rate.