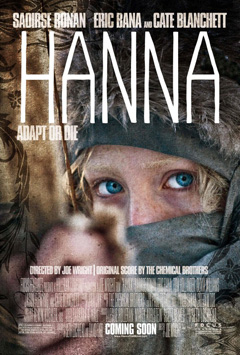 First of all, did you miss my interview with Seth Lochhead?

Hanna follows a 16-year-old girl (Ronan) who has been trained by an ex-CIA agent named Erik (Bana) to be the perfect assassin. For almost her whole life, she’s been secluded from all that we know of society, meaning that she’s never had other human contact other than her father.

Until she flips that switch, and Marissa (Blanchett) comes looking for her.

I have to admit that I didn’t love the film as much as I thought I would. Don’t get me wrong, I was really into the movie, and Saoirse’s performance blew me away — especially her fighting sequences. There was a lot of exciting action sequences with some thrilling “is she going to get found out?” moments. However, it is some of those moments, when you go “wha?” and “how?” — I had no problems with Hanna travelling miles across frontiers without an ID, I had no issues with Hanna being able to search online when she was scared of the electric water-boiler and the TV.

My problem was more on the line of “how is she getting away?” But as soon as that happened, she would kick some more butt, and my brain was back into the film.

When talking to Seth, and the coming of age fairy tale theme came up, I really didn’t know what to expect from it in the film. I saw an interesting and complicated relationship with Erik, as well as a deep wanting to find a mother figure. Hanna was about a girl looking for her mother — to me — so I really wished there had been one or two more scenes with Rachel (Williams). It’s in Hanna’s interaction with the family, which she finds through Sophie (Jessica Barden), that I find that coming of age film.

I think that’s why I didn’t enjoy it as much, because I needed more scenes with those interactions. Plus, I wanted to see more of Olivia Williams. LOL