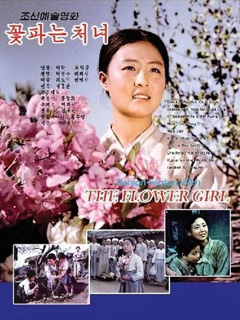 For practicality, I’m going to be labeling this film under “Korea” — I don’t want any comments about being offended or anything. Just so you know, this is my first ever North Korean film, but it’s not my first propaganda film [1].

My interest in propaganda films stems from mere curiosity, and I watch them with a certain detachment. When I had the chance to watch this adaptation of The Flower Girl — from a play presumably written by Il Sung Kim — I just had to do it.

Our flower girl here is Kotpun (Hong), a girl who sells flowers in the 1930s to try to save enough money to buy medicine for her ill mother, who works herself to death to pay a debt that threatens her family.

Kotpun’s family — and others — work for a wealthy family attached to the Japanese forces that had occupied Korea at the time, while the rest literally starve to death — the landowner feasts. To make matters worse, Kotpun’s got a younger sister named Sun Hui (Pak) who is blind, and an older brother named Chol Yong (Kim) who is in prison, so all the weight of the family lands on her.

The Flower Girl is really REALLY depressing flare for half the film, when everything seems to go from bad to worse for Kotpun in all the things that could go wrong in a melodrama. We’re not talking melodrama like “he doesn’t love me,” we’re talking about “we’re going to starve until we get enough money to buy medicine.” Little Sun Hui ditches her pride to help her sister sell flowers, when she decides to sing to get the people’s attention, and gets mistaken for a beggar to which her older sister Kotpun says no to- it’s just… I would probably beg if that meant my mother survives to something. Plus, she was not begging at all, in my opinion.

Halfway through the film, Kotpun’s struggle shifts and we see her going through every valley and mountain to find out about her brother, when everything crumbles… everything turns upside down when the “slaves” rise… and things get magically better.

I know propaganda film, I know who’s the hero… I just wished our flower girl had been that hero, and not the hidden family wildcard. As a viewer, things may not have turned 100% better, but if the brother hadn’t made that atrocity he did that landed him in jail, Kotpun, Sun Hui and his mom wouldn’t have suffered as much as they did. It just bothers me a lot.

Having said that, I really did like Yong Hui Hong’s acting… and the music. But then again, I’ve grown accustomed to this type of music.