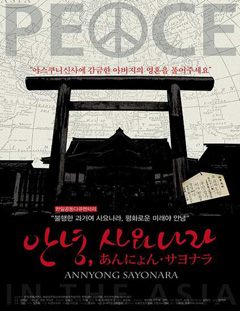 Annyong, Sayonara is a documentary following Ms. Heeja Lee, a Korean woman that lost her father when she was only 13 months old, back when her father was drafted by the Japanese army.

In her journey, she meets Mr. Furukawa, a Japanese man aware of what the Japanese army has done to their Asian neighbors, as they struggle to let other Japanese know about what the Yasukuni Shrine in Tokyo really stands for.

The documentary is an educational, yet quite emotional, ride as we follow Ms. Lee in search of the ghost of her father. Without any information on where to start, she talks to other Japanese — some are more hostile than others. But the general point of view is that Yasukuni Shrine is the place where the spirits of the deceased war soldiers are supposed to end up, as kami (gods), or war heroes.

Though hugely focused on the reasons of the wars and touching on some of the political sides, Annyong, Sayonara shows us how war, outside of politics, affects the people and breaks up families. The film was created in the hopes of saying “goodbye” to war and welcoming peace.