Miracle in Cell No. 7 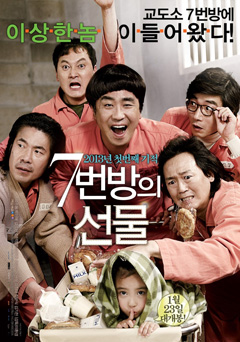 As of March 2013, Miracle in Cell No. 7 is the fourth best-selling film in South Korea trailing just behind of action-packed Korean flicks The Thieves, The Host… and, of course, Avatar. The difference between those and this one is that surely dramas about girls and their dads aren’t Blockbuster material, right?

To describe the film’s beginning with the word “heavy-handed” might be an understatement — if you had ever teared up watching Sean Penn dealing with Dakota Fanning in I Am Sam, you know what I’m talking about. Yong-Goo (Ryoo) is a single dad who absolutely ADORES his daughter, but has a mental handicap. Though this doesn’t stop him from being able to have a modest job to be able to provide an income for him and Ye-Seung (Kal), it doesn’t mean they’re swimming in a pool full of cash. In fact, he has just been able to save enough money to buy the adorable Sailor Moon backpack for which Ye-Seung has been mooning over.

Yes, Sailor Moon is a constant reference in the film! How awesome is that?

Problems arise when the last backpack is bought by the Chief Officer for his daughter, and it all gets awful when one thing leading to another ends up in the death of an innocent girl. Unable to defend himself, Yong-Goo is accused, coaxed and framed for the crime and sent to prison. DEPRESSING AS ANYTHING, RIGHT?

In a strange turn of events, Yong-Goo gets to meet… a quirky bunch of cellmates that includes brain-of-the-operations So Yang-Ho (Oh), and dorks Choi Choon-Ho (Park W.S), Shin Bong-Sik (Jeong), Man-Bum (Kim J.T) and old man Seo (Kim K.C), who alongside Prison Chief Jang Min-Hwan (Jung) will create a bond with the innocent Yong-Roo and his adorable precocious Ye-Seung.

I have to admit, after my initial doubts, Miracle in Cell No. 7 had me laughing one minute and embarrassed-crying the next. You know what kind of embarrassed-crying~ the one that has your tears sliding on the side of your face, and to avoid anyone watching you, your sleeve cleverly touches your eyes which have begun to swell. The next moment, it was a chuckle drowned in the sniffing and suddenly you’re clapping once again. It’s an odd experience for sure, but an incredibly satisfying at that. It might get corny at times, but it’s nearly impossible to not fall for the charismatic Kal So-Won — I see Mana-chan has SOME competition or maybe Kal will fill the void of child acting as Ashida grows up.

The good-feel comedy is great to lift your spirit up, as these bunch of crooked underdogs help the poor Yong-Goo that finds an unrecognizible Ryoo Seung-Ryong, compared to his solemn role in Masquerade. Though it would be more common to encounter the bad people in the story, the mood makes you believe in rainbows. The problems with Miracle in Cell No. 7 arrive by near the final fifth of the film, losing that fun tearjerker dynamic to give you the final blow. Oh, Kal So-Won, you really are one to watch, no?

You ain’t gonna find as good melodrama as this.

Miracle in Cell No. 7 will be screening at KOFFIA in Brisbane, Sydney and Melbourne.

You can also get the film on Korean Bluray or DVD on YesAsia.