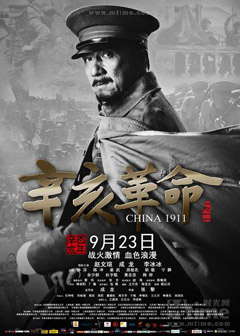 To celebrate the 100th anniversary of the Xinhai Revolution, as well as the 100th film in Jackie Chan’s filmography, Chan took not only the starring role in this historical drama, but he also co-directed the film, produced it — I read Li Bingbing also co-produced the film — and even did the stunt coordination.

1911 Revolution is basically Jackie Chan’s baby. A patriotic one at that. I bet that if my grandfather had the chance to see him like this, he wouldn’t have called him a clown any longer. Jackie Chan loves China, he loves how it’s risen, and I think no one can blame him for it.

I actually have no issues with propaganda films — check North Korea’s The Flower Girl — and I actually was one of the few that quite enjoyed China’s other CPC film, The Founding of the Republic, which boasted even a larger and more impressive cast and much more historical figures. However, 1911 Revolution overwhelmed me. I’m probably not as well-versed in the history of the Xinhai Revolution and how Dr. Sun Yat Sen (Chao, also playing Sun on The Soong Sisters and Bodyguards and Assassins) managed to put all the pieces in their right places for the overthrow of the Qing Dinasty, but I felt lost during most of the film.

The film suffers the exact same issue that The Founding of the Republic did — it relied on its audience to know the who is who in history, placing all our knowledge into captions telling us their names, as if we knew who they were. You may want to check those Chinese history books before you hit the theater or wait for the rental.

Having said that, I still stand by the fact that both historical films would make pretty good complements to Chinese Culture or Chinese History classes. Both films have history book accuracy — without the dirty bits — from a Discovery Channel or History Channel special, but with the quality of Hollywood historical films.

For regular audiences who missed Shinjuku Incident, 1911 Revolution shows a breakthrough role for Chan, who they’ve always associated with goofy martial-arts-esque comedies, that had little to do with his Hong Kong flare. And he does well here, he’s serious and serene (when needed), effective in his most dramatic scenes — most people won’t recognize him.

Joan Chen is just in a little part of the film playing Empress Dowager — funny, considering her role in The Last Emperor. However, the most surprising to see was Li Bingbing who has invaded my movie watching in films like Detective Dee as well as Snow Flower and the Secret Fan, and with a role in the upcoming Resident Evil: Retribution… I only suspect I will be seeing her even more often.

In the end, I wouldn’t really recommend 1911 Revolution unless you really REALLY know your Chinese history well. The film works for the Chinese market because they know the historical figures, but general audiences will have to rely on the caption-overlaid subtitles… it just plays like an overload of information, even for people who are used to subtitled movies.