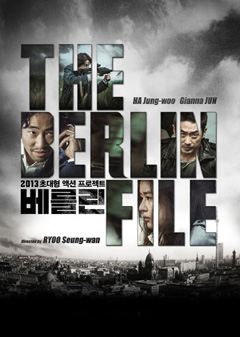 While the West keeps pointing its finger at Enemigo No. 1: North Korea (and other nations), for everything that’s evil and wrong with the world [1][2], feeding us fear-mongering (albeit ridiculous) notions that North Korea could invade Middle of Nowhere Town, USA — thank you, Red Dawn. North Korean representation on the silver screen has a savior… an unlikely “ally,” thanks to its southern brothers. Yes, the most shocking idea coming out of The Berlin File is that it centers around the life of a North Korean spy who struggles, is betrayed, is loyal, loves and suffers — North Koreans are people, yo! You have no idea how that blows my mind.

The Berlin File is a little muddled on its setup — I literally felt a bit dense trying to figure out who was supporting what and who was betraying who, but I’m chucking that to being spoon-fed information in Hollywood political thrillers. Here, take this thread and follow it. I’m sure that in a real life situation, I would feel as lost when the arms deal North Korean agent Pyo Jong-Sung (Ha) was attempting to pull through with the Russians and the Arabs falls apart at the last minute, which both the South and North Korean agents blame on an inside leak. Was it North Korean hero Comrade Pyo, his wife Comrade Ryun (Jun) who works as a translator for the ambassador (Lee). Comrade Dong Myung-soo (Ryoo) is here to find out.

There’s loads of fighting, deaths, betrayals, political talk, human drama and a lot of money lost. It’s as if South Korea is doing better non-Bourne movies better than The Bourne Legacy did with nearly the 10th of the budget [1][2]. And I loved it. The comparisons to the Bourne series are apt, of course, with the conspiracies, top-notch shoot-em-up sequences and fight scenes leaving you at the edge of your seat. What The Berlin File does improve slightly by giving a little more weight to its sole female character, and Gianna Jun is up to the task to deliver dramatically, overcoming even the most exasperating scenes in which she’s struggling to escape while wearing heels.

Unsurprisingly, the biggest draw is Ha Jung-Woo’s performance as the star of the film that makes Comrade Pyo a faulty man, unlike Matt Damon’s ‘superhero’ Jason, Pyo Jong-Sung is vulnerable not because he’s weaker or less trained, but his connection to his wife and what he’s willing to do is what sets him apart. His decision by the end of the film breaks all normal Western conventions — it’s not a fight for freedom nor a hunt for revenge against a nation.

The weakest point in the execution of The Berlin File is, and it always usually is in Asian productions, the English dialog. However, that’s not to say that Hollywood foreign dialog is to be praised either, but it is handicap in the flow of the story not only by content, but also by delivery. I can’t comment on the German, but Han Suk-Kyu’s South Korean  agent Jung Jin-Soo’s English conversation was quite painful. That in turn makes me think about this whole generation of idols who are taught multiple languages, which would give way to a whole batch of (future) actors who would be able to deliver natural performances in various language… just like European actors who dominate German, French and Spanish as well as English. The possibilities of South Korean film indeed seem endless.

The Berlin File will be screening at KOFFIA in Brisbane, Sydney and Melbourne.

You can also get the film on First Press Korean Bluray or DVD on YesAsia.